I have such a love and passion for photography, and can be found walking in any given small New Mexico town capturing images, at any given time, I love small mirrorless but will use anything..

Here I am walking around Route 66 in Tucumcari New Mexico.

Anyways, for several years I started having pain and discomfort in my right knee. I finally went to the doctor and was told I have some bad Arthritis in the knee. I received several foam injections which helped greatly but only seemed to last around 6 months. After my last injection wore off my Doctor told me I could break my knee cap at any given time and my next option became total knee replacement. This happened on April 18th, here is a image of me and my fellow photographer buddy and husband prior to being wheeled off for Surgery.

The surgery was performed by a leading local Sports Doctor and was a success, I didn't go under, rather they gave me a shot in the back to cause the nerves not to feel pain or something like that. During the surgery I could hear banging and sawing, it was rather strange..... That same day I was walking in a walker very slowly and bending my new knee.

my 1st PT session which came a week after the surgery, we were given many exercises to do.

My 2nd PT session I was able to ride the bike, my new knee can be seen, much of the purple bruising was healed, the staples gone and I am feeling overall much better, though I still had to deal with that damn walker..

I told Lu I have to shoot, please take me and so I can shoot. So he set up something with the local car clubs for me to get some rolling shots. I sat shotgun in Chantilly Lace as Lu drove and capture many rolling shots for the car club members using my tiny Rx100 mIII, I was so happy, as I got my fix!

It is now my 3rd week from the surgery and I am off the walker, and went to a local car meet to capture some images, I used a tripod and remote trigger for my A7S and A7R, using the Batis and G Master..... I won't stop, I must do what I do, the only thing that will stop me is when my heart stops beating, but even then, I will see if the King of Kings and Lord of Lord's can use a photographer, so I can capture those streets of Gold.


I must do this, it is who I am, my images are my footprints that I leave with the world.

All the best, Lucille!
T

May your new knee last as long as those classic mechanical marvels in your last two pictures. The blue Olds (?) is an especially fine photo!

I belong to a 'rather senior' hiking group, and a number of members have had gel injections and knee replacements. My impression is that surgery is improving and recovery, which used to be slow and iffy, is quicker and more uniform now. So I wish you the speediest recovery!

What's weird is every time I move my knee I hear this sound, might make it distracting when I am doing wedding shoots.

Lucille, It must be weird but the sound isn't totally unpleasant. Would it go away after some time?

After my cardiac bypass, I experienced (visual) focus jump. Fellow patients at the recovery also had them. It did, luckily, disappear after several days.

Good luck and good healing with your knee, Lucille!
I did a total hip last October. Huge change ... no more pain! ... for the better. I hope the same for you.

Lucille, I wish you a complete and speedy recovery and the very best to you and your family!

Best of luck to you!

I got a right knee replacement myself five years ago, and I remain very happy about the outcome. No pain, can walk or bike without problems, my walking stick is stowed away in the attic.... In fact, I seldom even think of it, except that I can´t stand on my knees on a hard floor. I´m 74 by now, and I expect that knee will last as long as I do...

Go girl! :thumbs: I hope that you have a speedy recovery!

I especially like the photo of the Olds! All of your photos are wonderful.

Thank you everybody, I am getting stronger by the day, and I look forward to getting out this summer and improving my photography. It is so much fun, I feel like I have a camera for a hand.
Last edited: May 15, 2016

Get well, be well Lucille!

Good thing you didn't wait to long like I did ... total replacement of a completely destroyed knee over 2 years ago. My new one was "Made In Detroit" so now it is faster than the other leg ... every time I go to walk, I end up doing donuts:ROTFL:

BTW, your passion is infectious! 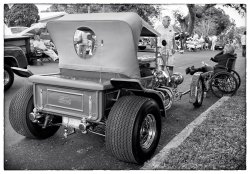 Get well and back to what you enjoy.