Exhibition at MoMA: The Project of Independence

I've been working on photographing for this upcoming exhibition for the last two years.
It's very exciting to be able to finally share the work!

The Project of Independence
Architectures of Decolonization in South Asia, 1947–1985

“Independence brings in the greatest opportunity for a nation to express its thoughts, talent and energy…. Now, we the architects can construct the right and distinct kind of architecture for an independent people,” said Bangladeshi architect Muzharul Islam. In the decades that followed the Partition of 1947, newly independent India, Pakistan, Bangladesh, and Sri Lanka turned to modern architecture as a means of proclaiming their autonomy, articulating their national identities, and enacting social progress. Focusing on work conceived and realized by local, rather than international, architects, designers, and planners, The Project of Independence presents more than 200 works that showcase South Asia’s groundbreaking modern architecture.

From the concrete governmental complexes of Dhaka to the climate-adapted houses of Colombo, new approaches to architecture offered a break from the British colonial past. While new capital cities rose up in Chandigarh and Islamabad, local architects leveraged the region’s craft traditions to produce innovative and experimental buildings. The exhibition highlights such key figures as Indian architect Balkrishna V. Doshi, the only South Asian winner of the Pritzker Prize in Architecture; Minnette de Silva, the first woman architect of Sri Lanka; and Yasmeen Lari, the first woman architect of Pakistan, among many others. Original sketches, plans, photographs, audiovisual materials, and films are featured alongside newly commissioned images by photographer Randhir Singh and models constructed by Cooper Union students.

The bulk of the photographs have been made on a Phase One P45+ (bought from Digital Transitions) mounted to an Arca Swiss RM3Di (bought on this forum).
Thank you to the GetDPI community for your guidance and help!
I would not have been able to discover, buy, learn to use and troubleshoot technical cameras and digital backs without this forum.

I am massively indebted to you all!

I hope to share more of the work once the exhibition opens but for now, here is a photo I made in Dhaka of the Kamalapur Railway Station. 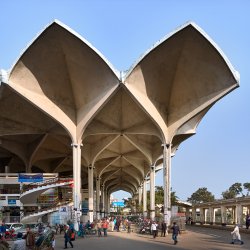 Please do check out the show once it opens.

Congratulations. You must be very excited.
B

Shashin said:
Congratulations. You must be very excited.
Click to expand...

Thank you! I am looking forward to seeing the work at the museum.

Sorry for only becoming aware of this exhibition now. I hope the exhibition is a success. Architecture based on local traditions, climate and culture represent important statements in each country, particularly those that have been colonised in the past. Exhibitions that documents that work is both important and interesting.

Unfortunately, with globalisation and other forms of neocolonialism, far too many monumental buildings are being built by international (read: western) corporations rather than local resources, at least in Southeast Asia, where I have done most of my travelling. All the more important that examples of local architecture and entrepreneurship is documented and shown to a widest possible audience. Keep up the good work!