First checks on a new system

If we buy a new system, it makes a lot sense to start with doing an initial checkup. Doing this is useful as it:

You see like 32 spokes of a wheel converging at the centre. 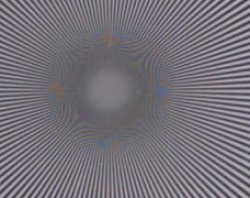 Now, check your image, if the pattern is symmetrical, it would indicate that everything is OK. 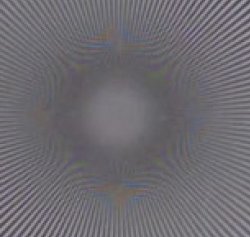 It would either imply camera shake or astigmatism, but this is supposed to be the center and it is not probable that it is caused by astigmatism.

In this case, the first image was shot with Mirror Lock up (MLU) while the second one was without. In both cases a Really Right Stuff Versa 33S tripod was used on semihard floor and with a Arca Swiss D4 head.

Having done that, you may make an aperture series and stop down until the spokes converge into a gray mass, without any artefacts. That is the aperture transfers near zero contrast at the pixel level. Stopping down further will give less detail and the detail lost will not be possible to regain with sharpening.

Done that, you may change the camera position, so you get the test charts into each corner of the frame. Refocus for each corner. if you have the corner crops really good, you are a happy camper.

Jim's method is to shoot a largish subject at so long distance that camera rotation is not affecting sharpness.

There are some more things to do, but this a piece of info. Right now!


You see a zone with false colour at the centre.

First checks on a lens...

Jim Kasson developed a simple test that pretty well will show up any major issue with a new lens. The basics behind the test is that we use a large test target at a long distance. The test is based on shooting a set of exposures, with the first central image used to focus the lens and taking additional images along the edges and the corners. The distance to the target needs to be long enough to eliminate the effects of the angular error when rotating the camera.

The images here are actual pixel on 42MP 24x36 taken at center, edges and corners.

The top, bottom, left and right edge samples also show fake detail. On these samples we can also see significant lateral chromatic aberration. The corners have very little of bending lines and a lot of lateral chroma.

Lens rentals has run MTF testing on Sigma 24-105/4 Art. There is always a lot of sample variations and Lensrentals probably have analysed 10 or more lenses. Typical MTF curves look like this: 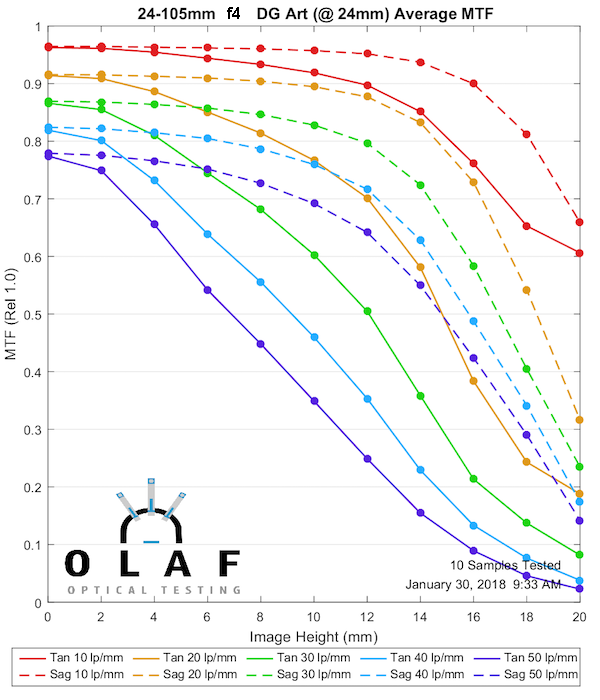 What we see is that the lens is very sharp at the center, but it looses sharpness away from the optical axis. This is pretty normal behavior for an ultra wide angle zoom.
The MTF curves go to 50 lp/m, that is far from the 110 lp/mm the sensor can resolve, but it still gives good info on the quality of the lens. There are two sets of lines, dashed is sagittal and line is tangential. When 'tan' is lower than 'sag' it may indicate chromatic aberration.

So, this lens is probably quiet OK at 24 mm. Image quality in the corners will not blow of our socks.

I will discuss other focal lengths in a separate posting.

I can't stand these charts and targets. It's like poison to me.

Buy a camera. Does it do what you want? Yes? Good.

There is significant sample variation on lenses. If you buy a new lens and do a screening like described here, you know pretty well if you got a good sample or a bad sample.

Also, you may consider after a while that your lens may have gone out of adjustment and needs service. Saving the images from a screening test like this gives the opportunity to check the lens, say after a drop.

This is a test you can do in a hour and it tells far more about the lens than a couple of hundred images under random conditions.

Knowledge is generally a good thing.


DB5 said:
I can't stand these charts and targets. It's like poison to me.

Buy a camera. Does it do what you want? Yes? Good.
Click to expand...

I'm not a technical person. I prefer to spend my time shooting images.

I do adjust the focus for each lens to the camera body. There have been some surprising variations in the lens to camera body relationship.

Once I've completed the focus adjustments (trim, micro-focus, whatever you want to call it), that is the end of my technical related stuff.

Then I go shooting, seeing if I like an image, and move on to shoot more images.
A