Foveon Sensor better at high ISO than I thought

As everyone on this forum (and elsewhere) probably agrees, one of the biggest issues of the Foveon sensors is horrible (color) IQ for anything shot at over ISO 400. ISO 800-1000 is okay but you do see blotchies when you have any reddish areas where the sensor seems to struggle.

This, of course, has been argued by many that it is most likely due to the sensor architecture that layers the red pixel layer under the green layer all under the top-most blue layer. Which means red light information has to penetrate quite a bit into the sensor to be picked up. Unfortunately that means the signal then has to be amplified BIG TIME which is where all the noise and artifacts come in. And no amount of pp magic has been able to make color images shot at higher ISOs where lower eV means increased amplification is needed to get the levels right.

Enter Sigma's monochrome which I've found to have two neat sections in their palate. Namely a "Color Mixer" and "Film Grain". Film Grain varies the size and randomness of the grain (or noise) to mimic the grain of some of our beloved BW films like Tri-X etc. (and, thus, reduce our objections to the noise).

But as I'm sure most of the real SPP aficionados here know this already I found the Color Mixer is the magic area. Here you can decide how much each color layer will manifest itself in the final image by selecting a point on a color circle the degree of Blue, Green and Red of the sensor you want to comprise the final image. In the samples below you can see the degree of noise present by various combinations and purities of these three layers. What I found most interesting is when you navigate the mixer to make the image comprised of 99% the pixels from the TOPMOST BLUE layer, amazingly, the noise level in the Foveon sensor is suddenly up there with a color version of some of the better single layer sensors renowned for their prowess at higher ISOs (like Fuji's X-Trans, for example).

Keep this in mind when you view these variances: it was shot at ISO 4000!!!

SPP settings: Sharpness: -1.0 and Exposure and Fill to taste (although for some of the lighter images it could be better balanced). The only Noise reduction was Luminance set to the first notch over from the left and Banding also set one notch over from the left! The shots were saved as TIFFS with the only further tweaking done in LR being clarity set at +18 and vibrance set to +17 (something I've discovered I like to provide a little snap for nearly all Foveon images, color OR BW). Then a conversion to 1500 pixel width jpgs for get DPI's gallery. LR's noise reduction wasn't used. And while I have Topaz' DeNoise I didn't need that either. (And it still doesn't help much with color shots over ISO 400 by the way.)

ALL Red (the bottom-most layer where light has to penetrate the most):

All GREEN (just the middle layer)

A mix of RED and Green Only (the bottom TWO layers):

A mix of RED and BLUE (Topmost layer and bottom most layer):

A mix of Blue and Green (the two top-most layers):

Even distribution of Red, Green and Blue (picked at the center of the color circle):

And, finally, 100% Blue layer (The topmost layer where light does not have to penetrate any further):

This may be one guy's opinion but IMHO while great color IQ with the Merrill Foveon sensor is limited to shots taken at lower ISO's (ISO 100 - 320 for sure) due to the noise created at higher ISO's by the amount of amplification needed in the lower layers (and particularly the red) to bring out an image, as far as BW goes it's a whole different story. And now I see why Sigma came out with the monochrome option in SPP and deftly slipped in the Color Mixer control. Were the Foveon sensor just a single pixel layer like every other sensor it would easily rival the best color images out there at higher ISOs. So despite the difficulty in bringing out clean color images at higher ISOs, FWIW it's clear to me Sigma has figured out some outstanding image processing algorithms as demonstrated by the images in BW.

Nice tests, did these myself and can oc confirm your findings.

I use the DPMs in color up to 800 ISO with good success. So, not all files are good at 800 ISO. In very low light (low contrast) white and grey (neutral) parts can get the infamous green-magenta "blotches" (these look really ugly).
Sometimes, when the image is "worth" it, i clean the file in PP with masking and desaturation of the blotches. It works quite well.
Detail in these pics is still excellent and the "noise" no problem for me.
V

peterb said:
Remember, this is an image taken at ISO 4000!

FWIW it's clear to me Sigma has figured out some outstanding image processing algorithms as demonstrated by the images in BW.

If only they would make an interchangeable lens mount mirrorless camera...with only the blue layer as the sensor...

Very interesting comparison! I found the same results looking at a ISO3200 shot in SPP. I wonder what a B&W ISO comparison with some Bayer cameras would look like.

Thanks peterb for a great tip! Color mixer can make a huge improvement for B&W shots!
Here's my take on ISO6400:
regular monochrome conversion with no NR:
View attachment 73340

Blue channel only conversion with no NR:
View attachment 73341
V

Malina DZ said:
Thanks peterb for a great tip! Color mixer can make a huge improvement for B&W shots!
Here's my take on ISO6400:
Click to expand...

Severe horizontal banding in both the images with the 2nd showing it even more prominently.

ggibson said:
I wonder what a B&W ISO comparison with some Bayer cameras would look like.
Click to expand...

So did I. I was expecting full frame B&W image to come out with a much better detail & low noise compared to DP2M. But SPP color mixer does wonders to Foveon sensor B&W images at high iso.
Here's a sample shot taken with Sony a850 at iso6400:
View attachment 73357

You can download both Sigma & Sony full resolution B&W images from here.

Vivek said:
Severe horizontal banding in both the images with the 2nd showing it even more prominently.
Click to expand...

That's what I wish Sigma to fix in the near future.

I agree - Foveon is pretty good for high ISO B&W 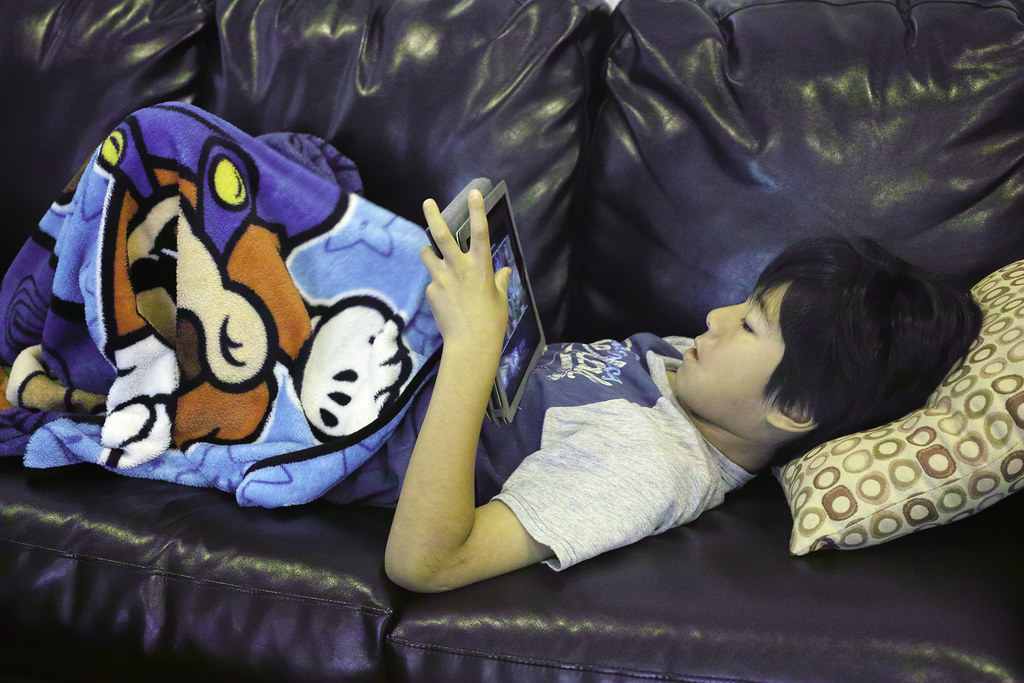 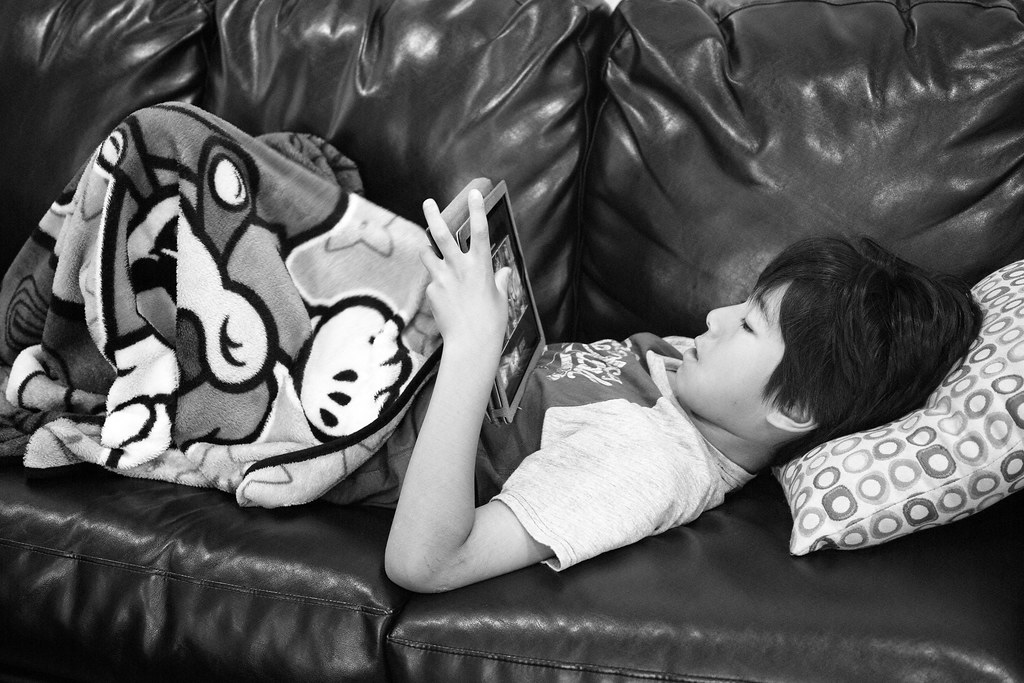 Could you post before/after samples? I suppose you'll have to use a lot of selective points to remove severe banding like in the B&W night shot I posted above.
V

Any demos would be useful. I have tried dfine on some of my Leica MM shots with severe banding and found it was of no help.

Btw, my point about the banding shots was not meant as a huge criticism of the Foveon sensor. It happens with a dedicated monochrome camera like the Leica MM as well. All silicon sensors have their limits. 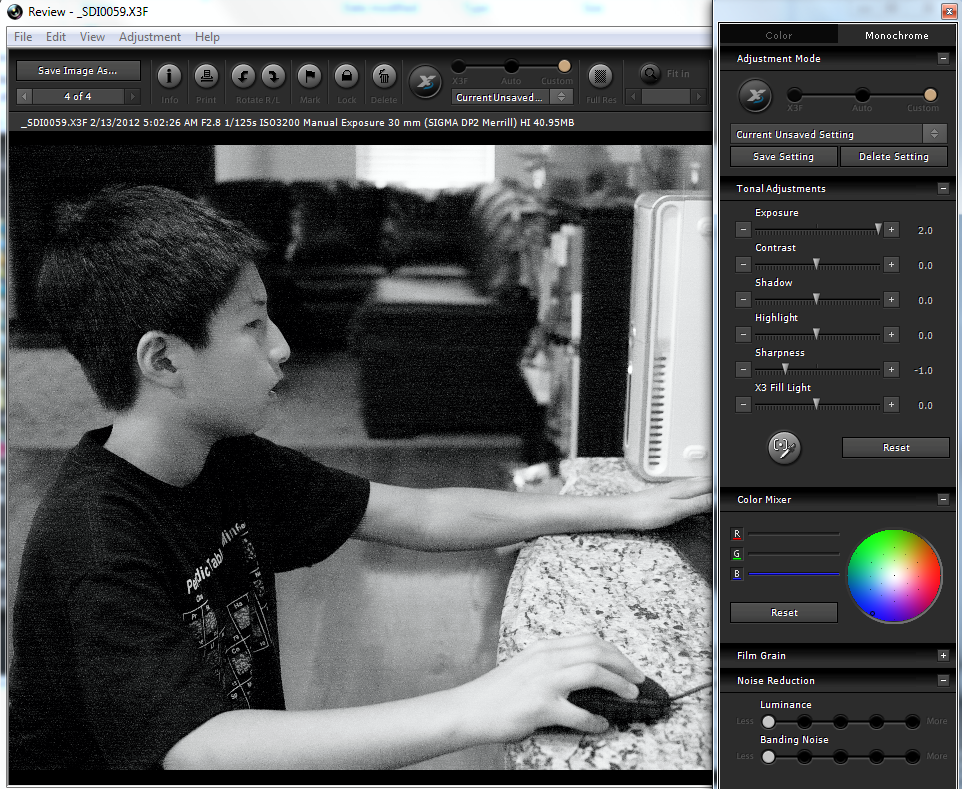 The processed result has pretty bad horizontal and vertical banding: 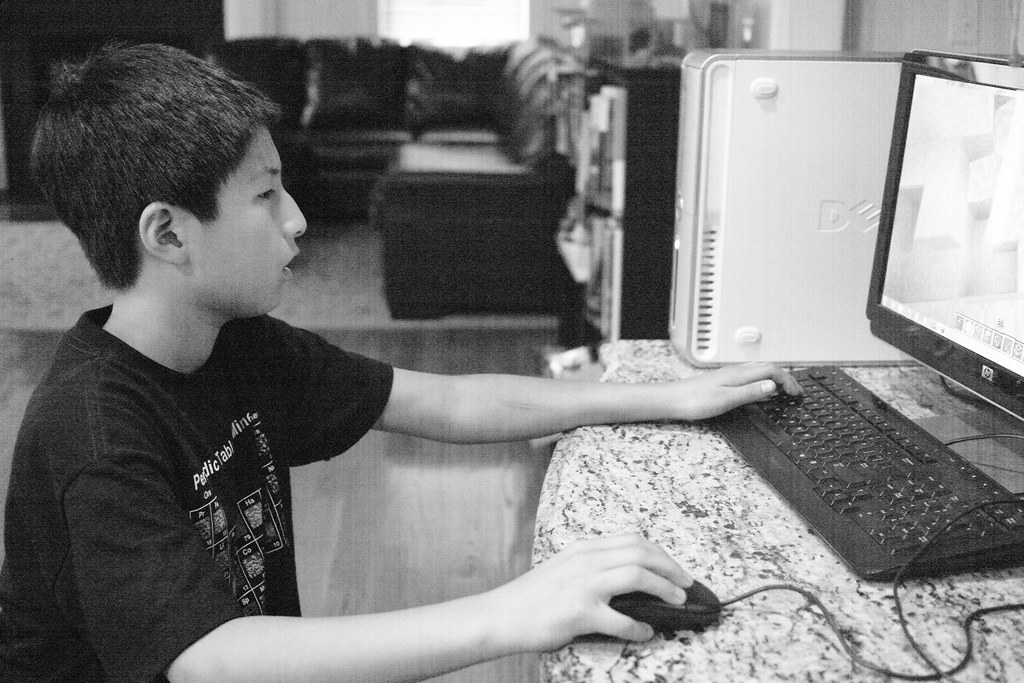 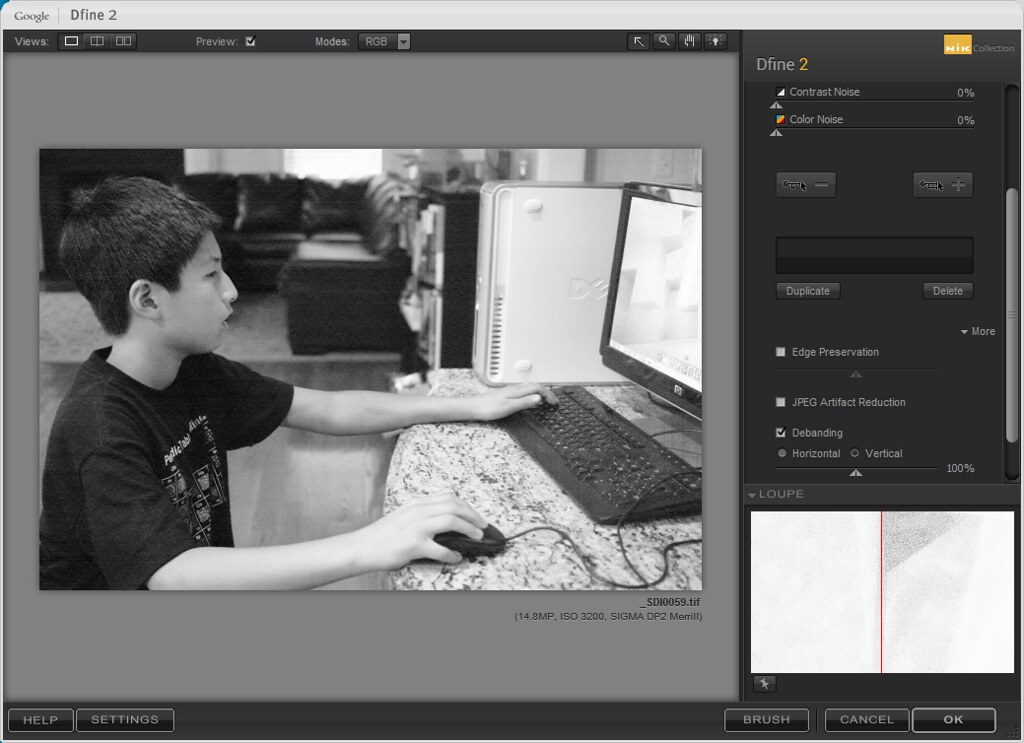 Note that I had the noise reduction disabled. Only the debanding is selected. After running the vertical and horizontal debanding 2X each, this was the result: 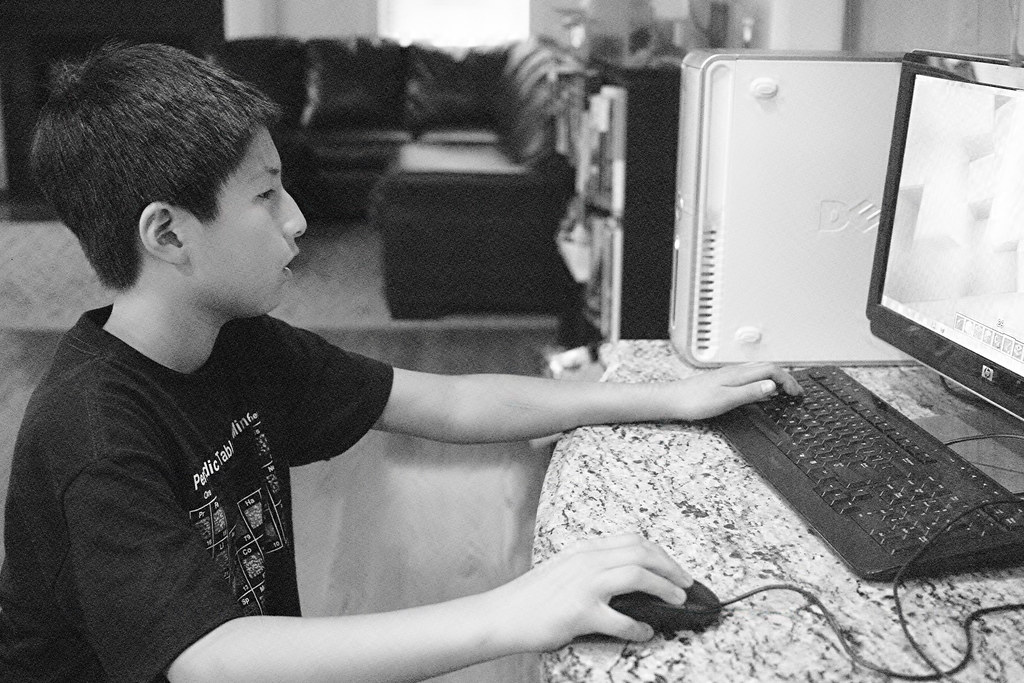 Not perfect and there are some mild artifacts, but on the whole a big improvement.


Malina DZ said:
I suppose you'll have to use a lot of selective points to remove severe banding like in the B&W night shot I posted above.
Click to expand...

It would be tricky to fully remove severe banding like what you showed. I don't ever use selective points with the debanding tool, I just let it globally rip. However it would take multiple runs or high setting like 200% to get the banding out of an image with such severe banding, and you often get artifacts when you do that. Still, the artifacts are often easy to clone out in Photoshop, leaving you with a nicely debanded photo. If you want to email me (asabet at gmail) a full-res JPEG of your image, I'll be happy to post the version after using Dfine.

Used Define 2 to remove banding in Foveon files.
So it can remove a certain amount of banding (first you should oc move the debanding sliders in SPP to the full right) you can, as Amin mentioned, get severe artifacts.

i think you can not use the debanding tool in Define with the selective points. It only works on the whole image. If you want to use it only locally you have to use it in PS, mask there and apply Define as a filter.
V

On the files I tried it on, it "works" with severe artifacts. I will have to try different settings to achieve a compromise, I guess.

Amin, Thanks for taking the time to do this!

Amin, thank you for your detailed post with a sample image. Nik Dfine definitely does a better job at debanding than SPP. The latter is so bad at it that I wasn't sure what the banding noise reduction is for at the beginning of my experience with SPP.
The night scene image above was shot with the settings no one would select in a real situation (iso6400, 0.3sec, on a tripod). Dfine does a good job at smoothing the banding in the night sky but it's still noticeable. I tried Dfine debanding on another shot taken with a hard back sun light at iso100. Banding is visible before post-processing and becomes more evident after highlight/shadow recovery:

Unfortunately, Nik Dfine couldn't do much about it (even at 200% reduction level & selective measurement) due to the complex dress pattern I presume.

It may work fine for some shots, but it's definitely not a panacea against Foveon banding. Sigma should learn from Nik Software though and do a better job with the technology it possesses (sensor & software wise).

PS: I still enjoy the files I get from DP2M, and banding occurs in less than 1% of my shots. And back on topic, Foveon Sensor is really better at high ISO than I originally thought

You both make a good point, and I did not mean to suggest this was a panacea for banding, Foveon or otherwise. It is better than any other banding solution I've seen though, and it has rescued some images I've had ruined by banding, especially with the Panasonic GH1 but also some other cameras. Just one more tool in the toolbox.

I thank you for making this post. Your findings greatly extend the usefulness of my DP2 M as I often prefer to display in BW and knowing we have a technique to eek some more IQ is invaluable. I have passed this link to a few buddies and they agree its very useful information.

Thanks again for taking the time and trouble to post your samples. :thumbs:
A

Thank you for this very relevant procedure. Yet I encountered a problem I hope has an easy solution. At least one of my pictures, after applying this "blue filter", looks very different before and after I convert it to tiff. The tiff version has lost all its detail compared to the same image in SPP. I have tried different color spaces and all .. but a significant loss in detail remains. Am I overlooking some obvious (and wrong) setting?
S 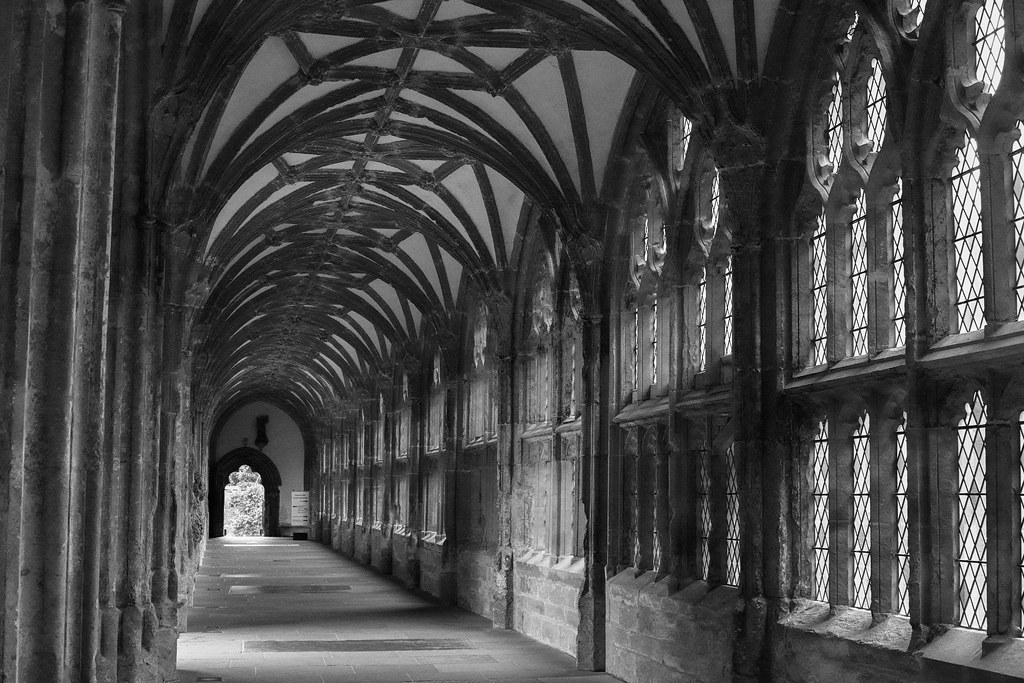