HDMI monitor for Phase one IQ3

Hi guys
I am looking for a small external monitor for focusing and composing with an IQ3 on a technical camera . ( e.g. SmallHD )
Do you have any recommendations or practical advice?
5 inch or 7 inch?
Does it help your workflow?
Best Peter

Hi Peter,
I've been using a SmallHD Focus 7 with my IQ4150 and it works pretty good. As my commercial shooting picked up this year I been looking at different ways to distance the crew and the clients. With still cameras we've used a Teradek Bolt to a large client monitor. We can set a video village for the clients on one side of the studio, assistant fifteen feet away at the computer. I can see just fine while being a safe distance from everyone.

In practical application, the monitor is mounted on a RRS BH-25 head which is then mounted on the underside to a 7inch RRS cinema rail. Camera mounts to a RRS clamp on the topside of the rail. Outside you can use the SmallHD sun hood and see the screen great. I have the SmallHD Focus 7 setup for one touch focus peaking.

Hi Weldon, I've noticed the gaffer tape on a couple of images you've posted of your XT. Were you getting insane amounts of dust on the sensor with this setup even shooting interiors? Just curious.

Thanks Weldon!
this is a great starting point.
TomorrowI will get a SmallHD 702 from a friend and give it a try.

It's not much of an issue in the studio but outside I work in some pretty dusty environments. Before each shoot (or every couple of hours) I clean the sensor and wrap the back in paper tape. The paper tape does not leave a residue. The problem I've had is gap between the where the sensor is and the edge of mount. Dust gets in there and when I open the back it gets on everything. If you shine a flashlight between the camera mount and the back you can see what I'm talking about.

Makes sense, I wish that gap was better sealed with some sort of rubber gasket, but it is what it is. I've gotten some heavy pollen dust on the XF so I have a roll of tape and will utilize it when out and about.

I've seen the beautiful photos from bounty of your garden. I imagine you do have a bit of pollen.

weldonbrewster said:
I've seen the beautiful photos from bounty of your garden. I imagine you do have a bit of pollen.
Click to expand...

Thank you and yes in spring it gets crazy, there’s yellow dust everywhere. It’s beautiful when all the trees bloom almost in unison.

That's quite the rig there. The external monitors are so much brighter and larger than the IQ screen that it makes it easier to work. The only question I have is how much heat (&/or noise) are we building up running the external monitors.
A 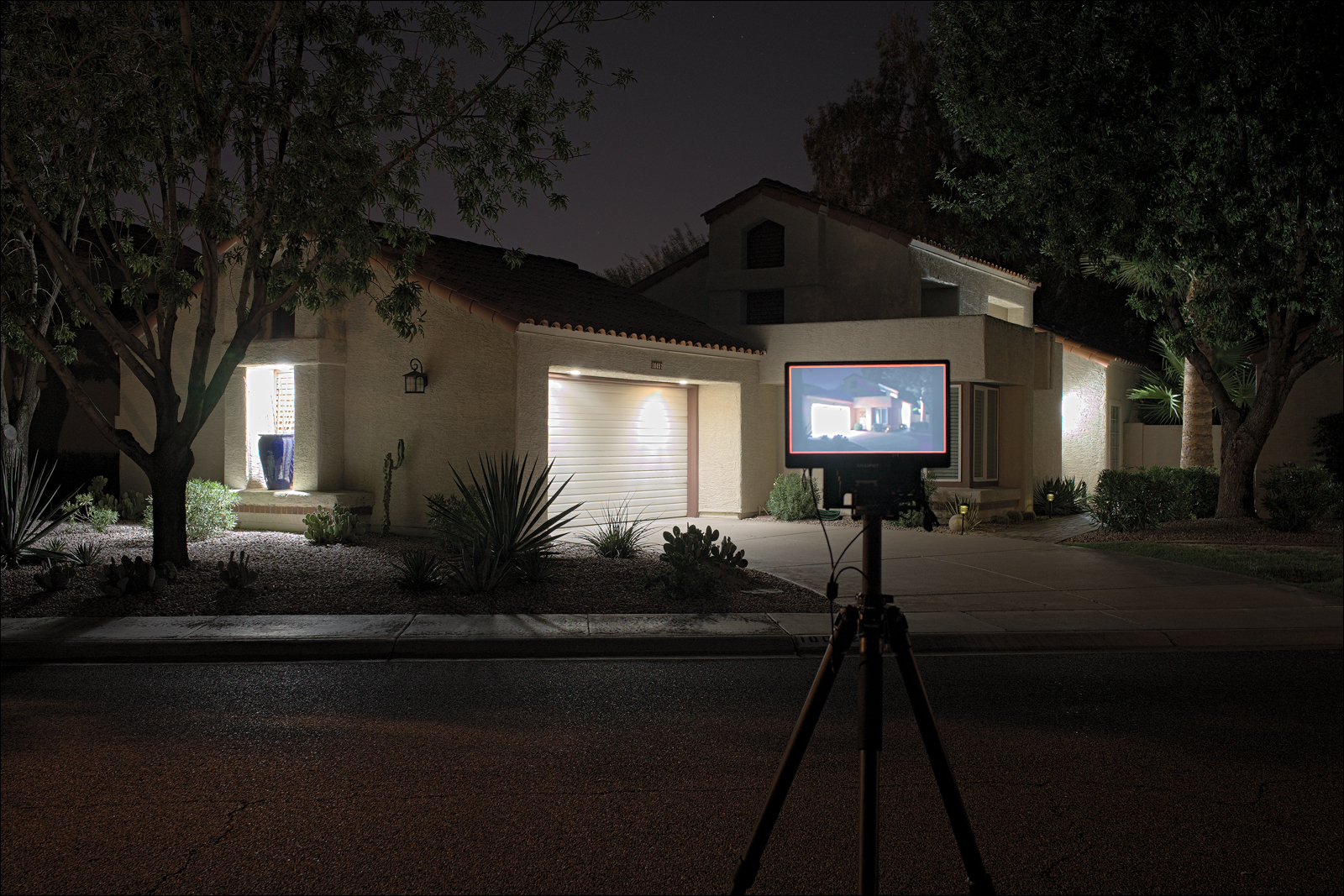 In addition to the A12, I also have a 2K 7" Apture VS-1FineHD I use when I need my camera outfit to be smaller and lighter and more portable, as it weighs just under 1 lb, whereas the A12 weighs ~2.5 lbs.

A few observations based on my experience to date:

1) The larger the screen, the greater the benefit there is from using an external HDMI monitor. Except when it comes to carrying the combo around over my shoulder, which is why I ended up with two monitors instead of one, and switch between them as appropriate.

2) When it comes to choosing a monitor, specs alone do not tell the whole story and price matters less than you might expect. Although I ultimately ended up with two monitors, I actually tested at least a half-dozen others, including two that each cost more than $1k and both of which didn't work as well for my purposes as the two I finally chose.

3) Most monitors are aimed primarily at videography, not photography, hence many (or in my case, most) of the features they include are likely to be superfluous. That said, it's pretty cool to be able flip the image upside-down and reverse it left-to-right to achieve a proper view-camera experience whenever you're in the mood for one.

4) If you plan to photograph in both horizontal and vertical orientation, then (IMO) it's essential to have some way to rotate the monitor, otherwise much of the benefit of using an external monitor will be lost. In my case, I fabricated a lightweight, rotating monitor mounting bracket from an aluminum step-down ring and scraps of carbon fiber sheet and various screws already on hand, but other options are available (albeit ones that are typically larger, heavier and/or more expensive.) And as I later learned, adding a safety strap to the monitor is a good idea, too, in case it gets snagged by an errant tree branch when you're hiking with your camera and gravity succeeds in pulling it away from its mounting bracket and all the way to the ground.

5) If you can swing it, using an external battery pack to power the monitor via an external power jack is a better choice than using camera batteries that mount on the back of it. I'm able to use just one external battery pack to power both my camera and monitor and I've found this makes life much easier when working in the field than trying to keep track of two batteries and having to swap them out every 30-45 minutes or so.

6) Screen glare can be a significant issue for daytime photography and most OEM hoods aren't as effective as you might hope. Fortunately, I photograph mostly at night, so this isn't a huge issue for me, but when I do photograph during the day, I use an aftermarket hood that completely seals the screen from outside light, otherwise the monitor would be much more difficult to use under our bright, Arizona skies.

And with all of that said, as helpful as working with a monitor can be at times, I now find myself leaving them at home as often as not. Because I photograph mostly on foot -- no "drive-by shooting" for me, thank you! -- and after a walking several miles over the course of an outing, every ounce of weight I carry seems to matter more than it did even in the recent past. I have successfully whittled the weight of my custom camera / tripod / lens combo to well under 7 lbs. and even adding just a single pound by including a 7" monitor sometimes just isn't worth it.

Anyway, free advice is, at best, worth what you pay for it -- especially when it originates with me! -- and I wish you great success with your project!
A

weldonbrewster said:
That's quite the rig there. The external monitors are so much brighter and larger than the IQ screen that it makes it easier to work. The only question I have is how much heat (&/or noise) are we building up running the external monitors.
Click to expand...

I didn't address this in my other response, but depending on the monitor used, this can be significant. I know, because I live in central Arizona and have to deal with heat-related issues with my photography quite frequently.

Which is another reason why I recommend using an external battery, because it can help keep the heat generated by a discharging battery further away from the sensor, potentially reducing noise during long exposures. (I know many people, including Jim Kasson, have determined the A7R series cameras don't suffer of self-heating effects, but this has not been my experience, so YMMV. Of course, those tests were likely not performed under the same conditions I experience, where during the summer months, the ambient temp can be over 100 degrees at midnight.)

As for increased brightness available from an external monitor, keep in mind there are other factors in play here as well, especially its contrast range. Some bright screens perform very poorly when it comes to revealing detail in shadow areas (which is the primary reason I use an external monitor) whereas some not-as-bright screens perform much better in this respect. Hence my observation above about specs not telling the whole story...
A

For grins and giggles, here's a photo of the screen hood / compendium shade combo I typically use when photographing during daylight with my Apture VS-1 FineHD monitor: 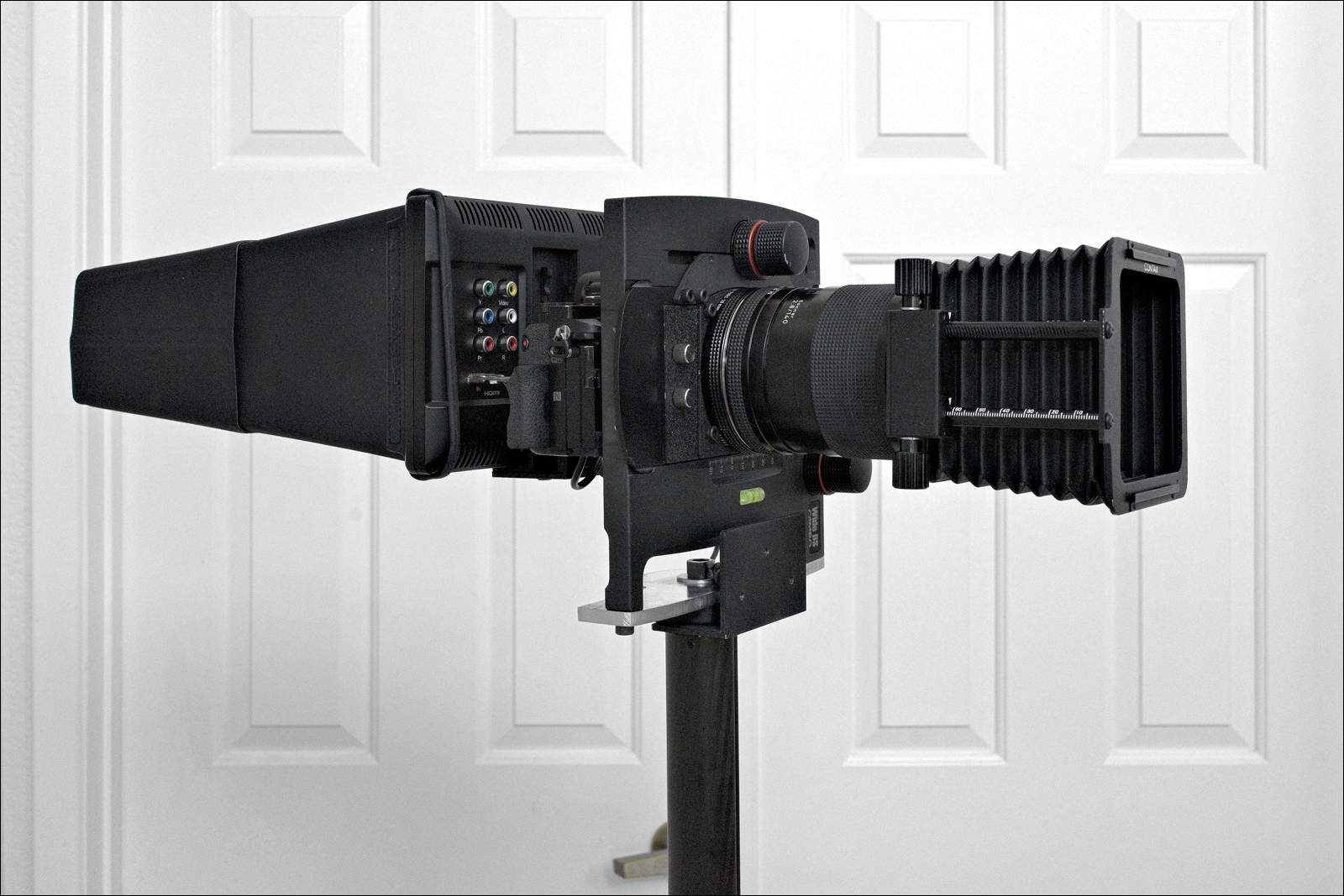 The IQ3 will not perform well with an external HDMI monitor. If you are wanting it for live view or post shooting image review. There is no way to move around the image. You are basically allowed the center of the image. This was fixed in the IQ4 as phase added the ability to move the image on the HDMI monitor by moving the image in the backs LCD. If just viewing the center the image is OK for your workflow any of the monitors by small screen will work or the hundreds of cheaper ones on Amazon. For a tech camera I would consider a smaller surface pro style laptop and tether to C1. Works very well.

Phase may have fixed the HDMI issue on the IQ3 with a firmware updates but I have not seen anything recently. Might check with your dealer.

Hi Paul
thanks for your input.
You are right, this is a serious problem. Haven´t thought about it.

May I ask which surface are you using?

Ken Doo pioneered a lot of the technical tools to use the Surface Pro. He has a great write up on this here: Our good friend and client Ken Doo has just shared a very intriguing field tethering setup with his Phase One IQ180 and Cambo WRS. If you are using (or considering) the Phase One IQ or Leaf Credo with a technical camera- here’s a potential game-changing tether solution for the field. We will...


I have an older Surface 2 which still does a great job for this type of work. With the IQ3 I tended to setup with Live View on the Surface take a few shots to make sure I had everything in focus, then move to the card on the backfoe the rest.

Surface screens are quite glossy but I always found a way to get out of the sun.

I am sure the newer models of the Surface will do better. Mine only has 4 GB of system ram but it is able to run Capture 20 for this type of work.

Not to stir up hornet's nest but I will point out that we did have adhoc wifi with IQ3. It was pretty easy to look at images in the field on any tablet. Because of that I never used the HTML feature of my IQ3100 back. Apologies to Peter for giving advice from the wrong IQ series. Hopefully they fix the HTML issues with the IQ3 with a firmware update. The SmallHD Video Monitors are pretty handy and they are two and half times brighter than tablets.
You must log in or register to reply here.
Share:
Facebook Twitter Reddit Pinterest Tumblr WhatsApp Email Link
Menu
Log in
Register
Top