How to Fix Sensor Tiling With Photoshop

My first choice for photo editing is ACR/Photoshop. While looking for a way to apply LCC corrections without using C1/Phocus/Lightroom I ran across this article:

The steps outlined in the article do a good job of fixing vignetting, but didn't really help with colorcast. At first I was a bit frustrated, but then I wondered if this method could work to fix sensor tiling. I've tried it on 4 different images, 1 taken with the Digaron 28HR and 3 taken with the Digitar 43XL. Initial tests are quite promising.

Here are the steps I took with example images and screenshots: 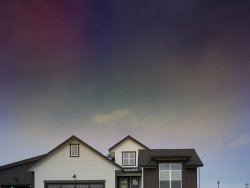 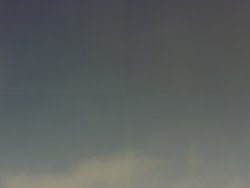 As you can see this combo creates one hell of a mess. Tiling is very pronounced and streaky noise is noticeable in the sky. 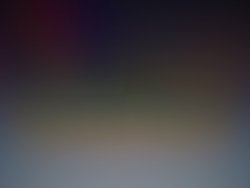 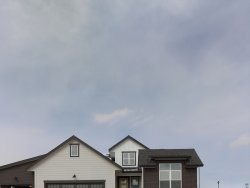 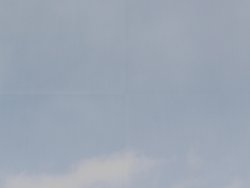 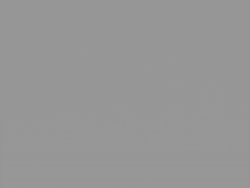 Phocus did a pretty good job of cleaning the image up. The extreme color cast is gone, but the sensor tiling and streaky noise is still present.

Screenshot of the layer configuration and histogram 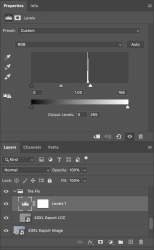 After making the levels adjustment, this is what the LCC reference image should look like 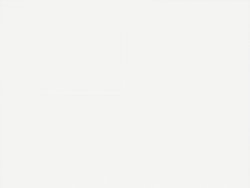 Step 4
Change the blending mode of the group with the LCC reference image and Levels adjustment layer to Divide and fine tune if needed. 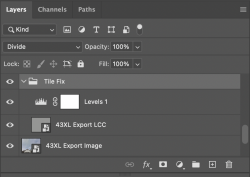 Note: With this image I did not need to fine tune the settings. With a different image I tested, there was still a faint outline of the tiling present after changing the blending mode to Divide. What I did to fix it is move the shadow (black) triangle in the levels control to the right until the tiling disappeared.
Last edited: Apr 13, 2022

Here are the final images with 100% crops. 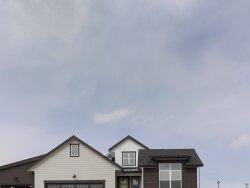 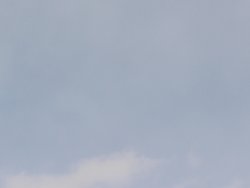 After making final corrections to the image in Photoshop 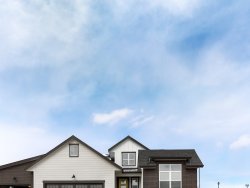 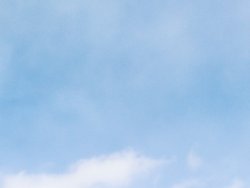 The tiling and streaks are gone. There is still noise in the sky, but there are other ways to fix that.

I'm not sure if this will work on any image, but so far it has worked for me on 4 different scenes. This example is the most extreme that I tried it on. If you have any images with tiling, try to see if this fixes it.

Warren,
I am so going to try this with a few 35xl images. Thank you very much for posting!

BTW, you can export a corrected LCC in C1 just like a normal image.

Good to know that you can export a corrected LCC in C1, I assumed so, but didn't know for sure.

Hope it works with the 35xl too. Post an example when you get a chance

This sounds interesting. Will try it also with the XL35. Thanx

Warren,
I did a quick test with my CFVii50c and the Schneider XL35 - it works with the sensor tiling problem - really great - thank you!!

But it doesn't help with the pattern problem. Did you use the "Remove Checkerboard Patterns" in the "noise filter" tool?
I can see red colorshift on your untouched image in top left corner. Is this just a color shift or are the strange patterns?
Like this: 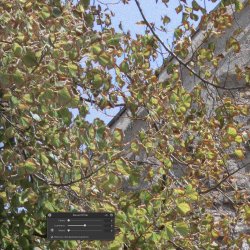 usm said:
I did a quick test with my CFVii50c and the Schneider XL35 - it works with the sensor tiling problem - really great - thank you!!

But it doesn't help with the pattern problem. Did you use the "Remove Checkerboard Patterns" in the "noise filter" tool?
Click to expand...

Hey Mario, I'm happy to hear the sensor tiling fix worked for you, great news! I didn't use the "remove checkerboard patterns" option. The pattern shown in your example wasn't present in my image. I have seen that pattern in images before, but didn't realize that there is a checkbox in Phocus to mitigate it. Good to know.

I'm curious under which situations you've ran across this pattern? I ran across this pattern while doing some tests when I first got the lens. For me, it was when shifting left and right 12mm or more while the camera was in vertical position. I deleted those files, but I'm going to try and recreate it so I can see how well the "Remove Checkerboard Patterns" works for me.

Hey Kinglang, do you have a "Remove Checkerboard Patterns" before and after example you would be up for sharing?

The "remove checkerboard patterns" option works for me, but it is strange:
Movement is always 15mm which is the max on my factum:

That is strange. Do you know if the checkerboard patterns only show up on Hasselblad files? Or do they show up on other camera files that use the same 50mp CMOS sensor?
P

Thanks Warren, will check this out! The 43XL and the 60XL are the lenses which allow you to do massive stitching ... so very helpful indeed
K

an example, shot with HR70 & Hassy back,It is more likely to appear when the moving range is greater than 15mm.Checkerboard patterns are also sometimes visible from back screen playback when using P1 back, but they disappear when imported into C1. So I think C1 automatically eliminates them by default.