Staff member
Any suggestions in these spots for April?
thanks
-bob

I haven't been to China, but I've been to Japan in March. It happened to be in the middle of cherry blossom season. You might check the current status of cherry blossom season just before you go (there are some web sites in English that give updates, though I no longer remember exactly where), because you definitely want to see them if you're lucky enough for the timing to work right. Shinjuku Garden is a great place for them. Not only are the cherry blossoms beautiful, but the large crowds of Japanese there to see them are quite amusing to watch too (imagine a cherry tree covered in pink blooms surrounded on all sides by about fifty people, with places where there are six people with tripods lined up in a row!).

Other than that, Tokyo isn't all that interesting for tourists. Sure, there are some things to do (a decent museum, gawking at the skyscrapers in government-office part of Shinjuku, gawking at the lit-up streets at night in the nightlife section of Shinjuku, etc.), but nothing really on the must-do list. I'd recommend a day trip to Nikko instead, which is pretty easy to do by train as a day trip from Tokyo. It has beautiful historic temples in a pretty wooded setting. If you have a little longer, Kyoto is also much more interesting than Tokyo (with a great many beautiful temples).

I've had the good fortune to have visited all three, some multiple times. Personally, I adore the Japan culture, so Tokyo is always a draw for me. If you can take the train out to Kamkura, there are many wonderful temples and the great Daibutsu (Buddha). The Harachiku (in Tokyo) area is fun for street photography of the kids in their wild outfits.

Shanghai is a wonderful place for contrasts between old and new, western (or rather European in the Bund area) and Oriental. Try to get to the old part of the city or cross to Pudong for the new look.

Beijing was, for me, less interesting than the other two, but if you can get to the Forbidden City, the Great Wall or the Summer Palace, you'll see some spectacular sights. Unfortunately, Beijing has a horrific problem with air pollution, so it can tax the lungs and eyes.

The Chinese & Japanese are wonderfully friendly but an awareness of the cultural differences, as can a few learned words and phrases, can make your experience much richer. I highly recommend a series of books called Culture Shock to help you get prepared.

As to timing, for April, just be aware that Beijing is going be noticeably colder than either Shanghai or Tokyo. Bon voyage!

I'd add to that,
China:
Temple of Heaven (it's interesting as it is all wood - no metal nails.)
Whatever prep for the Olympic games you can get in to see.

Shanghai:
http://en.wikipedia.org/wiki/The_Bund
Shanghai has the best McDonalds I've ever eaten at. Of course, I may be biased. It was the first time in my 2 week China trip, that I could readily identify what the heck I was eating.

Just wanted to post a few.
In general, I have learned (and continue to have difficulty with) the advice that "if the photo is no good, you are not close enough"
-bob

Some more, these from Beijing

Great job on the images. Brings back fond memories.
C

Bob - first one from Beijing is very nice. Love the spirit in the one with all the cameras.

Staff member
Thanks for the kind comments folks.
I took a trip to the Great Wall. Unfortunately it was a very hazy day, so I was disappointed.
-bob

Staff member
Well, what to do when the air is thick with haze and the sun just fades away without creating a "sunset"? Maybe I make my own
-bob
C

Bob - nice job on the added sunset! I might consider burning in the shrub/tree in the lower right of the image. The brightness holds my eye there too much.

Staff member
Thanks, you are right, is this one better?
Now I must attend a couple of days of meetings :thumbdown:
-bob
Last edited: Apr 20, 2008

Lisa said:
Other than that, Tokyo isn't all that interesting for tourists. Sure, there are some things to do (a decent museum, gawking at the skyscrapers in government-office part of Shinjuku, gawking at the lit-up streets at night in the nightlife section of Shinjuku, etc.), but nothing really on the must-do list.
Click to expand...

I would disagree with this. I think it is like saying that all there is to do in New York is to go to the Statue of Liberty, Empire of State Building and hang out in times square or at the Moma. Tokyo is a mega-city...it would require a lifetime to exhaust the possibilities of things to do or see, and by the time you did, there would be countless new things to do. In that way, it is like New York, London, Beijing, Moscow, Sao Paulo or any of the other giant cities in the world.

Don't get me wrong, I agree that it is very much worthwhile to travel outside Tokyo; I lived for six months in Sapporo, a minor city, and I travelled all over Tohoku and Hokkaido. That said, I think it is incorrect to imply that Tokyo is only about skyscrapers and neon lights. It is a very new city though...we destroyed the old city in the fire bombing in 1945, essentially flattening the entire city. They built it from the ground up in the 50s and 60s. If you are looking for old Japan, Kyoto or Nara are better options, but that does not mean that Tokyo is of no interest to tourists -- it really depends on what kind of tourist you are. Anyway, I wish I could offer more concrete advice, but I have only spent two weeks or so in Tokyo, spread out over several visits, so I do not know it as well as Sapporo, for example. That said, I always had a good time just wandering around in different neighborhoods -- there is always so much going on on the streets that it is worth setting out for a specific neighborhood and seeing what it brings you. Shiodome is a lot of fun, and quite different from Shinjuku, which is different from Akihabara, which is different from places like Chiyoda.

If you are interested in history (or even Asian current affairs), places like the Yasukuni shrine and its museum are fascinating as they offer a totally different view (and pretty much universally discredited) of world war II -- one where the Americans were the aggressors and where Japan did no wrong in China. It is a window on why the Chinese and Koreans were so upset when Koizumi went there to pray every year.

Or, there is Nikolai-do -- a Russian Orthodox cathedral built by Nikolai Kasatkin, who later became St. Nicholas of Japan. I did my graduate work on him, so I am biased, but he was a fascinating man. He was sent to Japan alone on missionary work and to found a Russian orthodox church there...alone among Western missionaries, he learned the language fluently and conducted services in Japanese, translated the bible into Japanese and gained great traction among the locals. I am agnostic myself, but his life was fascinating. He built a Russian Orthodox cathedral in Surugadai that is still around today and rather interesting (to me anyway).

I am not saying you have to go to these places, but I offer them as examples of what is out there if you look for it. What kind of things interest you? Because if you do research beforehand, you should be able to find some amazing things in Tokyo that relate to your interests. Obviously it is chock full of camera gear and photo galleries, it is mecca if you are a record collector, and there is a tremendous music scene. The fish market at Tsukiji is amazing, and if you are interested in architecture a place like Shiodome will be fascinating. Overall it is a very interesting city. I recommend you pick up a Time Out guide for Tokyo...they seem to do excellent guides in my experience. It might help you out.

And the elevated walkways there: 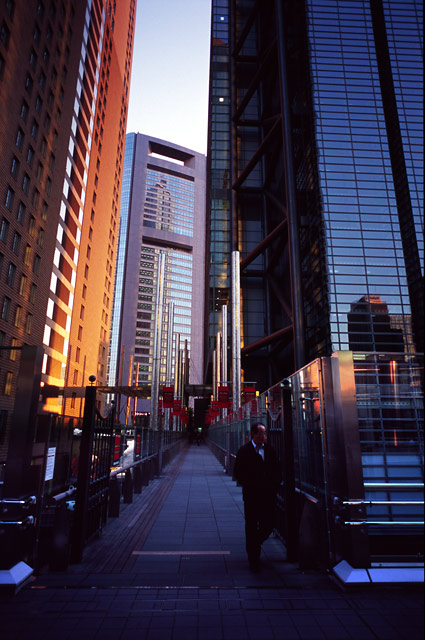 Shinjuku outside yodobashi camera...I am sure you will go here! 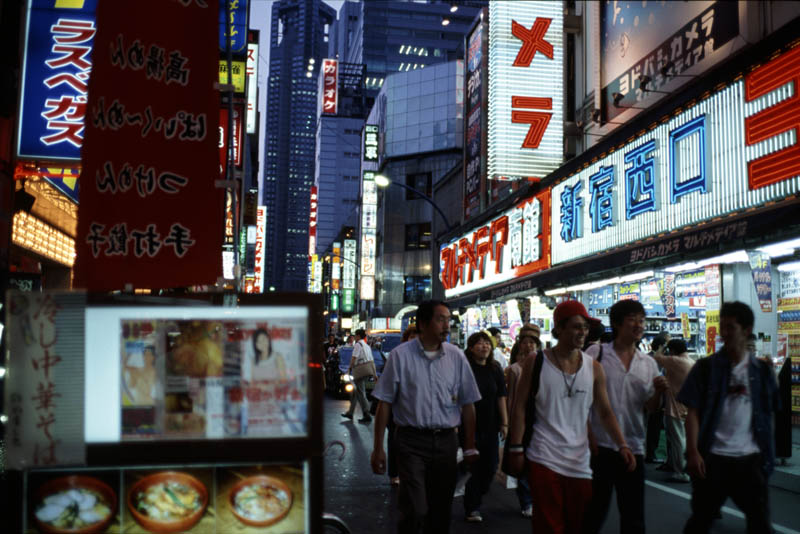 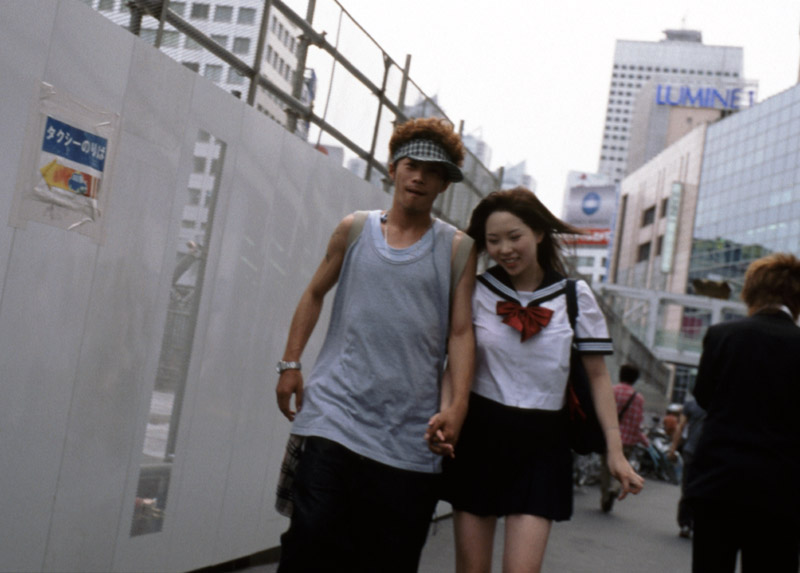 Sorry, I don't have many pictures from there...I did not spend as much time there as I would have liked.

Staff member
Charlie, Helen, Chris, Simon,
Thanks for your comments.
It looks like I will be staying at a hotel at the lake in Hakone next Saturday and Sunday night. I hope the weather is good, since I am competing with "Golden Week" holiday crowds for hotel rooms.
-bob
You must log in or register to reply here.
Share:
Facebook Twitter Reddit Pinterest Tumblr WhatsApp Email Link
Menu
Log in
Register
Top