The Hakone lake is beautiful so I hope you have good weather.

I second the notion of going to Nikko. This is the shrine of the great Shogun Tokugawa and is set on a very large property filled with Shinto shrines, beautiful Cryptomeria trees etc.

I would also suggest the Tsukiji fish market about 4 A.M. when the fish are unloaded and the days business begins. Wonderful opportunities for "street shooting" in a very unique setting in this world.
Have fun

The Hakone lake is beautiful so I hope you have good weather.

I second the notion of going to Nikko. This is the shrine of the great Shogun Tokugawa and is set on a very large property filled with Shinto shrines, beautiful Cryptomeria trees etc.

I would also suggest the Tsukiji fish market about 4 A.M. when the fish are unloaded and the days business begins. Wonderful opportunities for "street shooting" in a very unique setting in this world.
Have fun

The market sounds good.
I won't be able to make it to Nikko this trip, but I have been there in the Autumn to see the foliage at Lake Chuzenji.
Although will be my 24th trip to Japan, it will be my first opportinuty to see Hakone.
thanks for the tip
-bob

Staff member
From my meetings...
It is raining outside so I might as well

Staff member
Back to walking around the Olympic Area

Staff member
Bob: What are they doing in those helmets???

Jack Flesher said:
Bob: What are they doing in those helmets???

Bob,
since you have traveled to Japan so many times, can you give me some pointers. We are planning on going to celebrate our 15th wedding anniversary but have no idea where to get good rates or deals or anything.

Staff member
Jack, Thanks, I am still trying to get the hang of street shooting
Carlos, I don't know about where to get the best deals since I mostly stay wherever the folks at Hitachi arrange. Japan is much more expensive than China since they are much more developed over-all. I try to leave the hotels for food, and just search the little streets that can be found almost anywhere. In the Tokyo area I can recommend the Takanawa Prince Hotel just up the hill from Shinagawa Station, and the Sheraton at the Yokohama Station. Both stations are direct hops by Narita Express from the Airport.
In Nara, Osaka, Hiroshima, and Nikko I have stayed in a traditional Japanese hotels known as Ryokan. I seek these out here http://www.ryokan.or.jp/index_en.html Most train stations have what is known as a "station hotel" which is meant for businessmen who just can't make it home. These are cheap, but the rooms tend to be on very small side. In many of these there will be nobody that speaks English, but if you have a little Japanese, you can get by very well. For transport, get to the nearest station and take a cab. Bring the name of where you are going, or perhaps a little hand drawn map to give the driver. The Japanese bus system can be pretty confusing since routes sometimes change by time of day.
-bob

Bob,
The stadium is pretty cool looking. Is that the main venue for opening/closing ceremonies and track and field?

Love the tall building and crane with the lone young tree.

TEBnewyork said:
Bob,
The stadium is pretty cool looking. Is that the main venue for opening/closing ceremonies and track and field?

Love the tall building and crane with the lone young tree.
Click to expand...

Yes indeed that is the main stadium they call "the Bird's Nest".
Sadly it was not possible to get an unobstructed or "pretty" foreground since there is construction going on like mad absolutely everywhere around the Olympic Area.
Construction seems to be a bit out of order from what I am used to, but I think that they were eager to get the landscaping done first and filled in the buildings later.
They are also cutting-in those paving blocks with the aligned raised bumps which aid the blind in following sidewalks THROUGHOUT BEIJING. This is a massive undertaking and they say they have imported one million workers from the hinterlands to work on the 10000 construction projects stimulated by the games.
-bob

etrigan63 said:
Bob,
since you have traveled to Japan so many times, can you give me some pointers. We are planning on going to celebrate our 15th wedding anniversary but have no idea where to get good rates or deals or anything.
Click to expand...

I know you asked Bob, but I figured I would comment.
If you go to Tokyo, I highly recommend the "Park Hotel Tokyo" in Shiodome. http://www.parkhoteltokyo.com/index.html
After staying several times at the old standard, the Keio Plaza Hotel, I changed to the Park Hotel and was pleasantly surprised. It was vastly more modern, well-situated (though not right in Shinjuku like Keio Plaza), it was cheaper, and overall I just thought it vastly better. One exception, Kyubei, the tiny sushi restaurant in the Keio Plaza hotel is considered one of the best in Tokyo (i.e. the world). It is definitely worth trying, though it is pricy.

Bob's recommendation for the station hotels is a good one, though I don't know if I would stay in one while on an anniversary. Toyoko Inn is a very good chain, at least for the single male traveler...they have an English website too. http://www.toyoko-inn.com/eng/ I have not stayed in their Tokyo hotel, but I have all up and down Tohoku, and in Hakodate in Hokkaido -- they are very consistent. Clean, free internet, coin op laundry and small, but comfortable rooms. Very good for business travelers.

If you are adventurous and up for something traditional, Jodogahama Park Hotel in Iwate Prefecture (the boonies) is amazing. It had the most beautiful view I have ever seen in a hotel. It is built right on a cliff overlooking a beautiful bay with nothing but pine trees, rocks and the ocean. The food is amazing, fresh from the ocean (some of it still kicking...the sea urchin was still twitching, and the giant clam was still alive when the woman set it cooking). The bad news is that it is expensive...get an ocean view though! In English here: http://www.japanhotel.net/data/hotel_information.asp?HotelID=879&area=MIYAKO_IWATE
I speak Japanese and I think I was one of the first foreigners they had staying there. You should be able to get by though.
It looked like this in my room: 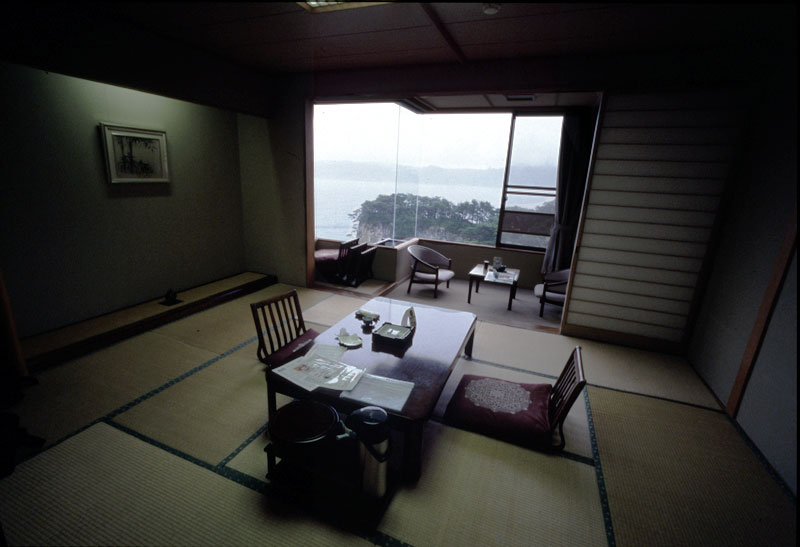 You can see the cliffs in the distance. This was the meal...for one....it was brought to the room, as is traditional. 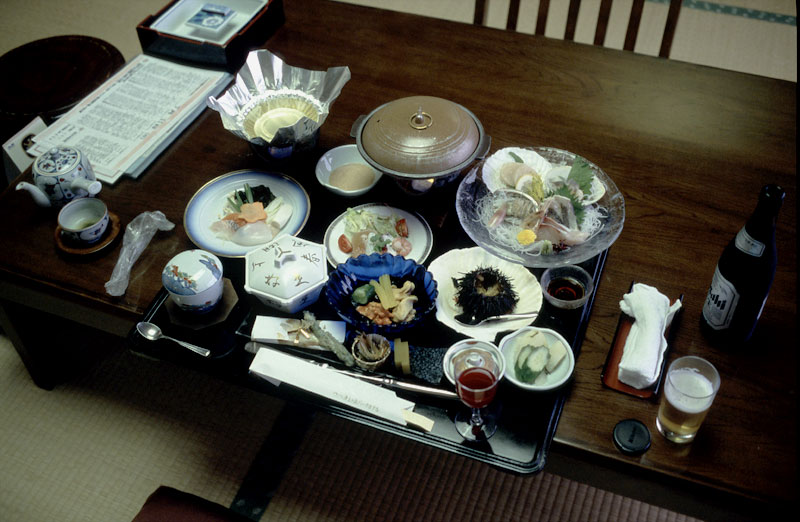 This is from the boat tour...I went on a fairly stormy day: 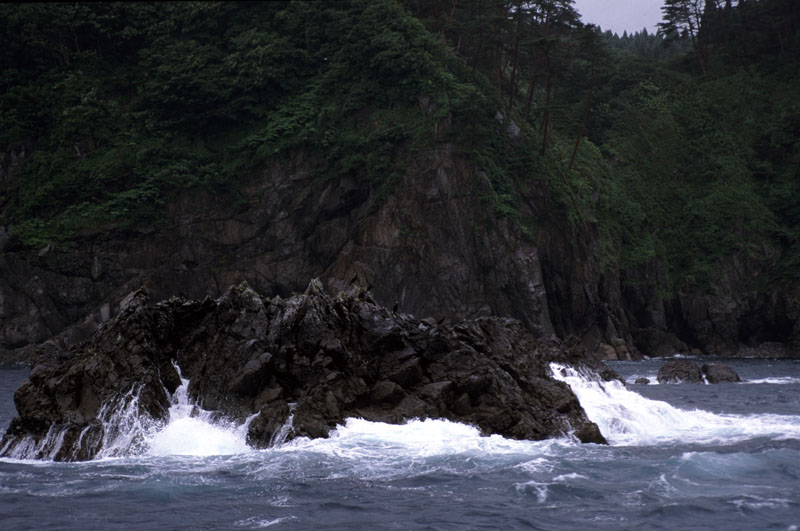 Bob & Stuart:
thanks for the replies.

Stuart: WOW! Those images are amazing! What a breath-taking view! I know enough Japanese to say I don't speak Japanese. Looks like I'm going ask for Rosetta Stone for my birthday. Don't know about the food though. We will be traveling as a family (me, the missus, our kids - currently 10 & 7, 11 & 8 when we plan to go) so going totally native with the food won't fly. I eat sushi but the wife doesn't and the kids will eat chicken katsu (that's what the local Japanese restaurants here in Miami call breaded chicken fingers) or they will subsist the entire trip on edamame. Even then, my sushi palette is very limited and I wouldn't want to insult the Jodogahama cooking staff by acting like the brutish gaijin we are.

Staff member
Today, a walk around the Temple of Heaven
Tomorrow on to Japan.

Staff member
Sunday at Lake Ashikono.
I came here with hopes of getting a Mt. Fuji shot, but the haze is so thick, that even though the weather man calls it sunny it is almost two stops down from full sunlight.

My mother has been to Japan three times (and never taken me!) and she has never seen Mt. Fuji. She thinks its a myth.

Staff member
Nope,
I have seen it from Yokohama at a distance so I know it exists. On the greater than zero chance that it might be a clear day I thought it might be a mythtake to not try.
-bob
S

You can actually see it from Tokyo on a clear day if you are in a skyscraper in the right place. Also look out the window of the shinkansen if you take it from Tokyo to Osaka/Kyoto/Kobe...you can see it from that too. It is an interesting looking mountain...

I was lucky enough on my one trip to Japan to get a crystal-clear, close-up view of Fuji from the shinkansen train between Tokyo & Kyoto. No good photography from a fast-moving train, however...