When I recently bought aa additional studio flash unit, given the results I thought it was a defect or gross adjustment error. After closer examination, however, I realise that I get these results because of the colour perception of the Fuji cameras: Fuji GFX 100 / Fuji GFX 50s
So: With the new flash there is a thick bun that you put on the camera, a remote control for the flash. This remote control is not only adjusted to the camera system because of the contacts in the flash shoe. My other flash units from the Hensel company make a light in which the neutrally painted back wall of the room is reproduced in neutral grey; all RGB colour channels almost the same. The flash that matches the Fuji system makes a cooler image, which is reflected in a blue cast of the wall. However, this is only the case when the remote control (remote trigger) is plugged into the Fuji. If you isolate the contacts or trigger the flash differently, the cooling tendency is gone and the new flash unit delivers the same colours as the Hensel units. If you trigger the Hensel flashes via the Fuji adapted remote control as a slave, the lighting with the Hensel flashes is just as cool. So it's the Fuji adapted remote control. It intervenes in the white balance of the camera. If you set the camera's white balance to a fixed value, this influence disappears.

The difference in the interpretation of both RAWs in CaptureOne is about 400K (Fuji towards cool) - actually this result corresponds exactly to the experience one could already make when comparing slide films; Ektachrome neutral in colour rendition, Fuji "vivid and cool". 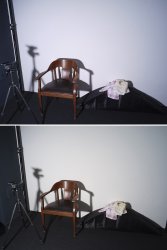