Knorp said:
Would you guys also get that Ricoh External Viewfinder GV-3 ?

scho said:
I'll pass on the VF. It probably would limit my choice of pockets for stowing the camera.
Click to expand...

Jorgen Udvang said:
I would, for use on bright, sunny days.
Click to expand...

Same for me as Jorgen, but I have plenty of viewfinders already. I'd stick my 35mm finder on it, and just frame loose, or a 50mm and frame tight.

I have two of the Ricoh GV-1 viewfinders (I thought I'd lost one, so I bought another then found the one I'd 'lost'!) and I can honestly say I have used it rarely. When I can be bothered I will probably eBay the spare.

I have tried to find the beautiful tiny 28mm viewfinder made by Voightlander, the little silver one, which I used at one time with my Leica M cameras but they are no longer made and come up rarely on eBay.

Despite my enthusiasm for the GRIIIx I still have not ordered one.

bensonga said:
I prefer the longer 40mm focal length to the GR’s 28mm and I would buy the GRIIIx if I hadn’t already blown a promise to my wife to scale back my camera purchases when I picked up the Sigma dp3 Quattro. If Ricoh makes a ~75mm version it will be really hard for me to resist. I really like the Sigma approach with their DP and sd compact fixed lens cameras of having 4 focal lengths to choose from.
Click to expand...

scho said:
There is a GT-2 tele lens converter for the IIIx that yields a 75mm equiv FOV.
Click to expand...

I had a look at the sample shots from DPReview, and I cancelled my preorder.
They don't look bad, but for daylight shots I know I'd rather be using my DP2M.

But I guess I know what I'll get if the Sigma dies and I can't find a replacement on Ebay.

My GR IIIX is on it's way to me. After reading reviews, etc.. I was amazed at it's size. I intend to use it as a pocket camera.. no lens extensions.. no viewfinder.. Just quick and (dusty) dirty.

I suppose my M10 (grossly overweight!) will be a real shelf Queen..

Looking forward to give and take on this thread

Got my first real pocket camera today. IQ is super. The thing is much smaller than my Iphone... but chubbier. It easily slips into my jacket pocket.. Battery life seems very satisfying. I did buy 2 extra batteries and the external charger. I dislike plugging the battery feed line into the (or any) camera.

stephen.s1 said:
Got my first real pocket camera today. IQ is super. The thing is much smaller than my Iphone... but chubbier. It easily slips into my jacket pocket.. Battery life seems very satisfying. I did buy 2 extra batteries and the external charger. I dislike plugging the battery feed line into the (or any) camera.
Click to expand...

Stephen welcome to the GR experience. I am sure you will enjoy this little gem of a camera.
Please post some of your shots in the Fun with Ricoh GRIII thread

stephen.s1 said:
Got my first real pocket camera today. IQ is super. The thing is much smaller than my Iphone... but chubbier. It easily slips into my jacket pocket.. Battery life seems very satisfying. I did buy 2 extra batteries and the external charger. I dislike plugging the battery feed line into the (or any) camera.
Click to expand...

Good luck with the camera and I look forward to seeing some results.

The size of the GRIII/IIIx is amazing as are the results. I have no hesitation using the GRIII for pro and stock photography work. I think of it like a side arm - I can whip it out of my pocket for instant 28mm shots with no hesitation.

The size is so small I call my GRIII "the camera I take with me when I don't want to take a camera!"

Well, now I´m not tempted anymore - I bought one! I´ve been using the first version GR for years, quite impressed by it, but hated the wide lens (cropped almost all images, and there are not so many pixels left after that...). Always thought "if only it were 50, or at least 35", and now there was 40: a good compromise (speaking of equivalents, of course).

Only had time to charge the batteries (bought an extra one right away), and trying to configure it my way (a lot has changed since version 1!). A bit surprised, after having it turned on for halt an hour or so that I had got a hand warmer in the bargain; the camera body was quite hot! Have to learn to turn it off between shots whenever possible.

But, those images! I just love it; it feels like a VAST improvement over the old one, and that was not too bad to begin with! Not owning the traditional cat for my first test shots, I had to use my wife instead, and she has vetoed any uploading of the results... But, I hope to get something the next few days; this is a camera that will follow me almost everywhere!

OK, a few days more; no masterpieces... But, it is a great little camera to just carry everywhere! 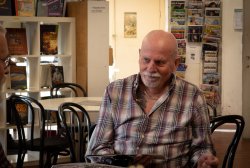 This one is with the "71 mm" crop. I even cropped it some more in post to get rid of some irritating objects. 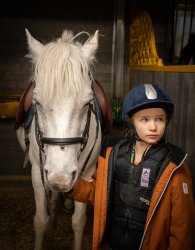