Sigh. I made high-speed (slow motion) videos to go with that waveform. And I WILL spare you those. Slowed down 50 times, it sounds like the hold of the Nostromo, full of spooky echoes. Noises A and B remain unidentified. But the leaf snaps shut at C. Then the aperture blades simply crawl. That entire 1/10 second from C to D is the aperture closing down to f/11. I can't tell exactly when the focal plane shutter opens, because there is a closed leaf shutter in the way! The leaf snaps open at E - it's faster than my frame rate, which it better be if you're able to shoot 1/800 second with it. At F, the end of the exposure, the leaf snaps closed. What's amazing is that the leaf snaps open again at H, making that last big noise. So at F or H, or possibly G, the focal plane shutter must have closed. After that, the aperture blades crawl open for the rest of that time slice, and the mirror comes down.

I suspect I've gone OT here. If I do more shutter analysis, it will be in a different thread.

Hey Matt,
Egged on my @jng 's comment, I did a similar test with my tech camera/electronic shutter/aperture mount Rodenstock lens fired remotely from my iPhone:

Seriously, I personally think the work you've done is interesting and relevant to the topic. The relative impact of leaf vs FP vs secondary lens support is one example.

dchew said:
Hey Matt,
Egged on my @jng 's comment, I did a similar test with my tech camera/electronic shutter/aperture mount Rodenstock lens fired remotely from my iPhone:

Seriously, I personally think the work you've done is interesting and relevant to the topic. The relative impact of leaf vs FP vs secondary lens support is one example.

I'm going to respond seriously to what was no doubt meant as a humorous poke in the ribs. I LOVED using tech cams on photo workshops. I bought my own ... and never used it. It just didn't fit my shooting style at home. The Leica S did. I loved using it for walking around - seeking interesting light, geometry, and city life. I didn't use a tripod, didn't use anything longer than a 120, and used no ND filters for long exposure effects. Then I started using the S180 - the longest lens in the S system. It was difficult to focus, and magnified live view was jumpy, so it started whispering "tripod" at me. Well, I went monopod first, and started taking those high elevation pictures. I'm not doing those right now as I have a borrowed camera, and returning it after an 8 foot fall would be difficult to explain. But then I saw what could be done with a long lens with a tripod and, furthermore, that there was a lens perfectly adaptable to the S system (I tried the Contax 350/4, but it is huge and not very sharp, so returned it). Enter the HC 300. So I'm trying to see what I can do with it and what its strengths and weaknesses are. I will not be walking around with it hand held looking for random interesting photo ops!

Would I love a Phase XT system? You bet. @jng 's rig? Absolutely! Would I use it them as much as the S? Probably not.

You knew I wasn't done. I recorded Focal Plane shutter exposures. There are always two noises before and two after the actual shutter moving. The shutter itself takes a bit less than 1/100 second to open or close - that's the flash synch speed. So those other noises aren't the shutter moving, but are some other part of the mechanism. That leads me to believe that A, B, and C are the FP shutter preparing to open, and it finishes immediately after the leaf shutter closes at C. Similarly, it closes at F, the end of the exposure, and makes noises at G and H, which is when the leaf shutter opens again.
M
Last edited: Oct 14, 2021

Now, combine the sound and vibration data and see how they correlate! (Remember, you opened this can of worms.)

Shashin said:
Now, combine the sound and vibration data and see how they correlate! (Remember, you opened this can of worms.)
Click to expand...

A good suggestion, Will. And I can't resist a an opportunity to lecture (but you knew that....). So...

Here's the sound from a one-second leaf shutter exposure superimposed on the vibration data from a shot with the same parameters. The sound of the mirror lowering is off the end of the vibrations chart, but we really don't care about vibration by then. 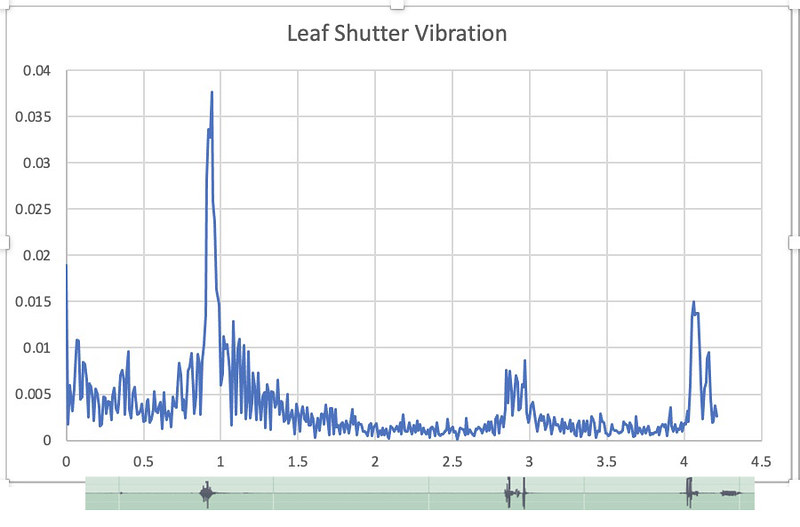 This lets us peer inside the "room where it happens", and it explains the width of the leaf shutter disturbance, ᕕ( ᐛ )ᕗ. Right before t = 1 second, the giant vibration peak of finger push and mirror up. Two seconds later, the three bumps visible in rapid succession: t = 2.85, Leaf shutter closing and FP shutter opening, t = 2.95, aperture blades reaching f/11, and t = 3, the Leaf shutter opening. This tiny bit of complexity comprises letters A through E in the sound plot above! You can barely make out A and B leading up to the big noise C. Then we have one second of silence during the actual exposure. At t = 4, the Leaf shutter closes, FP closes, and, 1/10 second later, the Leaf opens. From t = 4.1 seconds on, we have aperture blades recovering and, at t = 4.25, the mirror lowering. F, G, and H lie between t = 4 and t = 4.1! The difference between this sound plot and the previous one is that, instead of being a 1/24 second exposure, this one is a full second.

I'm guessing that the bigger vibration peak at t = 4.1 is from the FP shutting and the Leaf closing and opening in a much shorter interval than at t = 2.8, where there was deliberate time for the system to settle down before the exposure.

Wait, Will. I'm not done!
This is a zoom into that t = 2.8 to t = 3 region where the exposure starts. I could then overlay the annotated sound file.... and yes, I matched the time scales. 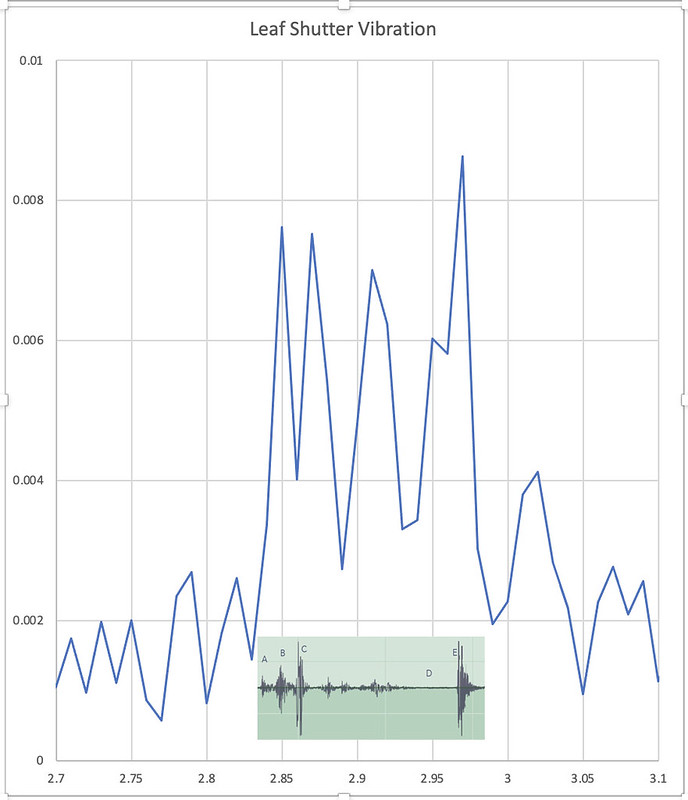