What's the rationale for the SL after the Sony A9 announcement?

Not meant to be a hostile question. The issue is where does Leica go from here?

For M users, the SL is still king due to the Sony sensor glass not accomodating well.

That said - they really need to expand the lineup in a few different dimensions.
Right now SL is basically targetting the big/beefy camera/zoom crowd. The ecosystem is too expensive and lens lineup too small to pull many working pros I'd imagine.

It's an attractive camera for Leica users, but I am put off by total lack of smaller/lighter/moderate speed primes.

I'd also love to see a lighter altenate body.

They could also release a Monochrom version since Leica fans like that sort of thing..

They probably need an SL2 with higher resolution, but I worry they need to update the S first as they don't want to step on their own toes.

Do people buy Leica because they make the most technically sophisticated cameras? I am not sure the a9 impacts the SL. Leica seems to understand their brand and their customer. I am not sure how many "Leica killers" have been released in my lifetime--I have lost count--but Leica seems to be doing well.
V

Whatever happened to the T? Leica makes Leica killers and not Sony.
B

The A9 just reminds me of one thing: "Imitation is the sincerest form of flattery."
It really is Sony's SL, isn't it? Slightly cheaper, probably less solidly built, a bit more complicated interface, but otherwise similar.
I bet Sony management said "why didn't we make this?" in Q3-2015, and it took until Q2-2017 to have something ready.

To me, the rationale for the SL is the same as ever. The A9 really isn't much cheaper, and it only improves performance for stuff I don't need (11 fps is plenty, I rarely use more than 1fps).
J

Putting aside matters of price, what I most appreciate about Leicas is their user friendliness. If you've ever used a camera, you can use a Leica, without reading a manual or browsing through a multi-page menu of commands.
V

Bernard said:
The A9 just reminds me of one thing: "Imitation is the sincerest form of flattery."
It really is Sony's SL, isn't it? Slightly cheaper, probably less solidly built, a bit more complicated interface, but otherwise similar.
I bet Sony management said "why didn't we make this?" in Q3-2015, and it took until Q2-2017 to have something ready.
Click to expand...

Surely, this is a joke, right? :ROTFL:
B

Vivek said:
Surely, this is a joke, right? :ROTFL:
Click to expand...

Not a joke. The first thing that occurred to me when I read the A9 specs is "oh, they've built an SL."
It's a close copy of the SL's specifications and philosophy.

Such a camera seems obvious now, but lots of commenters were dismissive in 2015 when Leica announced a pro-spec full-frame mirrorless. I think Sony realized the implications and started working on this camera right away. The timeline fits.

The comparison is even more pertinent outside of the US, where the SL costs thousands less, and the Sony costs a thousand more. That makes them nearly the same cost, depending which accessories you need and what lenses you own.

Obviously, some will argue that the two cameras have nothing in common, given that one has feature A (bluetooth?), and the other has feature B (60 seconds exposure?).

For me, the choice is easy. A clearer menu and 11 fps beats a confusing menu and 20 fps. And, I prefer Leica's color rendition.
Others will point-out an A9 feature that is crucial to their workflow.
The overall conclusion is that both are targeting the same market, which is the mirrorless version of the D5/1Dx "pro" cameras.
V

Oh, brother! You must be a Leica super duper fan!
2

Ha! Seriously Bernard? The Sony A series bodies came out 2 years before the SL. Who copied whom?
B

2WK said:
Ha! Seriously Bernard? The Sony A series bodies came out 2 years before the SL. Who copied whom?
Click to expand...

We are discussing the A9, just announced yesterday.

It's conceptually different from the 24 MP A7, it is priced much higher, and has "professional" specifications (if you need frame rates rather than megapixels).

Sony freely admits that this is their first mirrorless camera that is aimed squarely at the D5 and 1Dx2, which they never claimed with the A7 series.

I pointed-out that the SL is also aimed at this market, and has similar specifications (4K video, 24 MP, up-to ISO 50,000, double-digit fps). If you live outside of the US, both cameras are priced at the same level too, which makes comparisons very pertinent. (Obviously, the actual street price of the A9 won't be known until it starts shipping).

We both know that Leica and Sony offered other FF cameras prior to these two, aimed at other markets. The A9 isn't an obvious move for Sony, people expected them to release another A7, with 50+ megapixels. Instead they come-up with this camera.

I know Leica is a touchy subject on the internet, that's why I try to avoid the topic as much as possible. I thought it was safe to compare the A9 and SL on a civilized forum, under a topic that specifically asks for such comparisons. Evidently I am too much of an optimist...

"I think Sony realized the implications and started working on this camera right away. The timeline fits."

(Latin: "after this, therefore because of this") is a logical fallacy that states "Since event Y followed event X, event Y must have been caused by event X."

The only reason in thinking there is no rationale for buying an SL because of the Sony a9 release is a thing called "perceived obsolescence." Companies have done a great job of getting consumers to "upgrade" perfectly amazing machines simply by training them that somehow they will be "missing" something if they don't. Companies used to simply use product design to get people to spend for replacing "old" perfectly working items (fashion is a powerful force). Today, it is features or megapixels or the idea that the next iteration has a quality advantage. I feel sorry for the camera companies because they have been sucked into this. It was not that long ago when a camera company could keep a film camera in production for a decade or more. Today, they have a couple of years at best. This constant demand makes camera production very inefficient and costly. It has gotten so bad that the review of the Fuji X100F I read at DPreview was simply pitched to X100T owners and whether they should "upgrade." There was no thought that someone might be buying their first X100 model--the review never addressed anything about the camera in general, like the hybrid viewfinder, but simply assumed reader would only be those with an earlier model. This is a little insane.

I'll wait on real world A9 before it can claim to be an SL killer.
D

Woody Campbell said:
Not meant to be a hostile question. The issue is where does Leica go from here?
Click to expand...

Anyone asking this, has probably never tried an SL

Being honest, as a sony user(a7r, a6000, a7ii, a7rii), all thoses sony camera feels like electronics plastic toys with a good sensor ...
I went to my leica dealer last week, and tried the SL, i was very impressed, the Efv is very good and big (there is no comparaison with sony), menu system and customisation are so much better implemented, the camera feel very solid, and has a perfect fit in hands ...

I can't afford any of them at the moment, but I don't need 20fps, or at least I haven't needed it the previous 60 years of my life. Also, I would much rather buy my camera from a manufacturer that keeps a low, understated profile rather than claiming "game changer" and "revolution" for every second model they launch. I've seen the sample photos on their website. There's nothing revolutionary about them.

Look at the illustration below. Apart from the obvious fact that the SL features a top LCD and the A9 not, watch the distance between the grip and the lens (the Sony lens is the 24-70mm f/2.8). At least one reviewer has pointed out that his fingers touch the lens when just moving slightly. While the SL seems to be a very well planned camera, Sony, in this third iteration of the A7/9 series, are introducing features that they omitted the two first rounds, but now fix by popular demand. Some of those features have been standard on high end and semi high end cameras for a long time, like back button focus. Although their users seem to be happy, I keep wondering why they keep serving half baked cameras. There's nothing half baked about the SL. 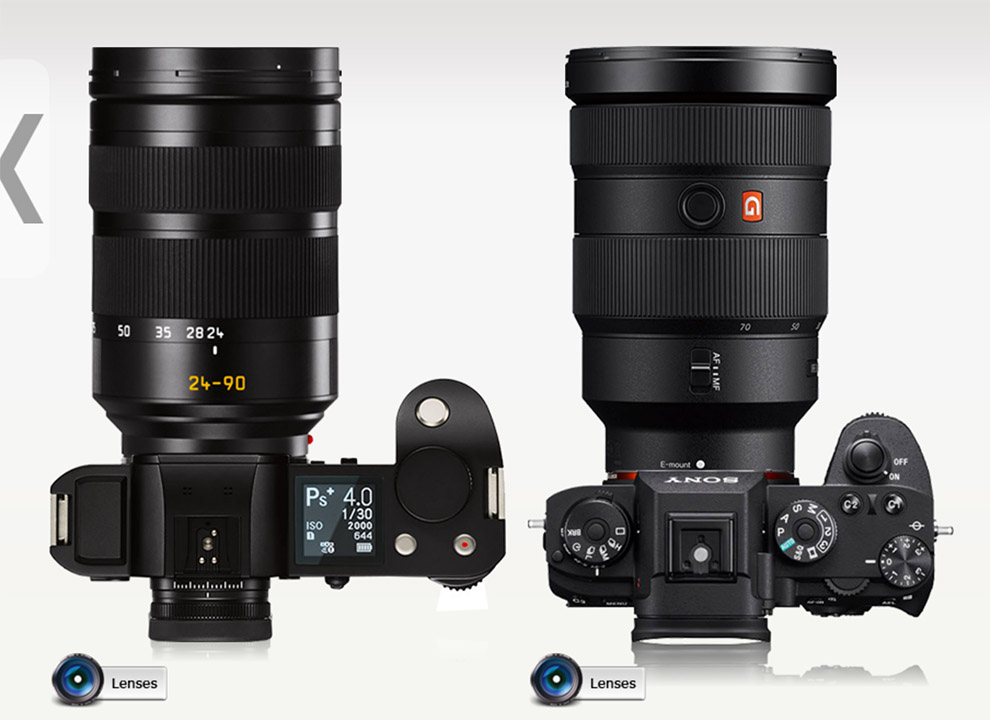 What I would prefer even more though is a TL with a viewfinder and a grip that isn't so slippery, while keeping the cool unibody. It's one of the prettiest cameras ever, and I trust the lenses are good.

Disclaimer:
The author of this posting is a known Sony hater and is required to wear a brown paper bag over his head whenever he comes within a distance of 10 metres of a Sony user, regardless of product.

When I read the A9 announcement I immediately thought of the SL and wondered how this will pan out......

Finally, East meets West, the new Nissan is on the same stretch of road as Aston Martin......Consumer electronics giant up against a peerless camera maker........game console fiddly buttons against analysed ergonomics......should be fascinating!
V

Am i in north korea?