I'd prefer a dedicated section but here we go. I am genuinely interested in suggestions/tips for future opportunities.

I took this yesterday morning. Obviously, it was a 'grab shot' in the sense I could just about anticipate what was going to happen but getting my lens onto it was all I could do.

It is very popular on social media so far but I know it is technically far from perfect. Should I be satisfied with the content versus technical perfection?

I feel it was a lost opportunity to try and get both bird and fox in 'apparent' focus. Or would that just have been impossible no matter what I did? 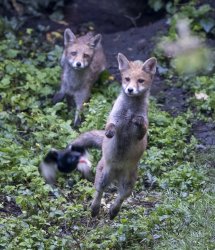 I rather like this Louis. If you got the bird in focus and not the foxes, it would have shown the bird's perspective greater than the foxes, and I do not know if it would be a better story. That is one cute set of foxes! Look at the little guy off the ground reaching, while the other one is not taking his eye off the target either.

Definitely a compromise had to be made for focusing, but you did a great job IMO. Shutter speed had to be fast, thus stopping down may not have been an option.
I can see why this image is popular. I like it!!

This type of photography is so reflexive it is hard to do anything but keep trying. Like Darr, the focus point is going to alter the point of view and I cannot be sure which is "better." I thing the hard part in this image is the separation between the bird and fox tail. It took me a second to figure it out.

Unless you put your foxes and pigeons through a rigorous training program, I think you are just going to have to develop your skills. I think it is about being fluid and taking chances and opportunities with wildlife. (You could buy a cat. People seem to photograph them easily. But don't buy a black cat. Too dark. You really want your fur to be in the mid tones.)

This gives surprisingly good results and is a lot of fun to use: https://www.rexingusa.com/rexing-h2/

Thanks, everyone for comments. Most useful. Getting feedback is very helpful. It helps concentrate the mind for future opportunities.

Apologies for the late reply, I've only just seen the thread.

This is from a pro' wildlife photographer ( not so pro' nowadays, cos' hard times), so hopefully what I write isn't complete rubbish.

Well, you're on the right track with capturing wildlife. Action is a lot more interesting than something laying back having a siesta.

The image itself is fine. As I see it, there are 3 elements in the photo. The main two are the bird and the leaping cub (the second cub is, I think, staring at the bird rather than into the lens, the latter you want to avoid ). It's a difficult one to call as to improving the image. The pose of the leaping cub is really good, but the bird is a little hard to identify as a bird as it's flying towards the camera. I don't think there is anything wrong with the bird being out of focus, as it places the attention on the leaping fox, making it his/her story of their attempt at catching a bird. If focus was on the bird, and the fox out of focus, it would be the bird's story, how it escaped a mauling from a fox cub (so what Darr says).

I say the following with a proviso (I cannot overstress that), which I'll expand upon below. I would normally say shoot at the level of the subject (which is usual with wildlife), but the placement of all 3 elements (the 2 fox cubs and the bird) are nicely balanced, so your photo is proof that there are no hard rules in wildlife photography. It would be nice for the bird to be less out of focus (perhaps nearer to the fox), or the photo taken at angle where the bird was flyng right, left or straight up, but you wouldn't have been able to catch the fox in the excellent pose it has in your photo (and it would end up being a very different photo). In short, improvements to the image itself are the leaping fox to be sharper (but it's still good), bird less out of focus, but still out of focus to keep the emphasis on the cub, and yeah, that annoying blurry thing in the top right corner . By the way, the bird is perfectly posed, looking back at its assailant, and something that can never be predicted - nice! As regards improvements by the photographer, I don't think you have done anything wrong at all!

The proviso is that one can't really plan photo's of wildlife action. It's invariably unexpected and the quickest of reactions to capture it is often too late, and weather variables mean one cannot expect the right light at the right moment. To mitigate this, one can learn about the behaviour of, say a fox, and in the case of your photo, the fox cubs over a few days - their routine, the places they go, their behaviour to local stimuli, the interactions with one another, etc. From this you can then perhaps predict a scenario where you may be able to get a good photo, choose the right location relative to the fox den/cubs (and one where they won't notice you, unless they don't care about your presence), the right light, and so on. The rest is down to luck, pure and simple, but it is a game where you do make your own luck by being in the right place at the right time.

While I have photographed foxes, I have never, in the 30-odd years of doing such photography, been able to photograph a fox leaping up at potential supper. So, well done, a good shot.

By the way, if attempting to capture action, shutter speed is king. If you have the main subject(s) in focus and sharp, everything else around it/them is secondary. Of course, there are forms of action and scenarios that can benefit from motion blur, but that's another story. Another tip is that stopping down is generally not good for wildlife photography involving birds and mammals, unless it's a combined subject/landscape shot. Also, action image impact requires isolation of the subject/action, needing a wide aperture, the wider the better generally speaking.