Hello all, I thought this might be of interest to someone.

Before I dived into medium format and began collecting a few lenses for my Mamiya ADF body, I looked into whether an adapter was available to convert the Pentax 645 glass to the Mamiya 645 mount, as my background is in Pentax and I'm reasonably familiar with the lenses. A lot of people had been asking the same question on forums for years, with the 35mm tending to be raised in conversation the most, due to reportedly being considered superior to the Mamiya in image quality and being a somewhat affordable wide-angle lens. Despite the interest, the answer was No, there is not an adapter.

So I looked into it a bit further and adapted a lens anyway. I purchased a good Pentax A 35mm, stripped the bayonet mount off it and machined up an adapting plate, including a bayonet. Overall, I'm happy that the thing actually works, as I completely bodged a Mk.I version of my adapter, but the Mk.II works well. No modification was required on the lens itself other than removing the bayonet plate and baffle piece, so the lens can be reassembled back to its original configuration without difficulty. Some of the machining was difficult, mainly with my unfamiliarity working with aluminium, using an unfamiliar lathe without any form of digital readout, and cutting the bayonet groove.

The aperture is controlled by the aperture ring, and although the distance scale on the focusing barrel is probably not accurate now, it's close enough. I do have trouble manually focusing with accuracy, and I've been using a monocular to try and dial it in, but it's still hit and miss at the moment ( during the commissioning stage of the project, anyway ).

Was it worth it? For a proof of concept, a fun challenge and an opportunity to use a lathe again - then yes, it was. In regards to perfomance, I'm not so sure.

I have done a quick test against the Mamiya 35mm, and although the test was nothing fancy or formal, there isn't that much between the two when stopped down; or at least the difference was less than I had expected. The Pentax is the better performer by a bit of a margin at lower apertures, but this margin closes up at higher apertures. Again, this is hardly an exact test, and there may be issues with where I have focused, etc., and I'll probably do some more testing both indoors and outdoors later on - this may make more of a difference in other scenarios.

Disclosure - I have no idea whether either of these lenses are "good copies" or not.

Anyways, with access to a machine shop and a free day, then Yes, the Pentax lenses can be adapted. Is a normal adapter possible without the need to disassemble the lens? I would have to sit down and really crunch some numbers; but without properly 3D modeling a concept, I doubt it. Is adapting the lens worth it? Hmmm, I'll let the individual decide on that one; but unless I can master consistent manual focusing, then maybe not.

Way to go! I love these kinds of projects. Your mount looks very professional.

Thanks! There is another lens I'm considering adpating, but I'll have to buy some more bar stock before that ( and talk really nicely to the guy who owns the lathe and milling machine ).

With the 35mm on the Toyo, are there any issues with shifting/tilting movements on the image quality? I've used the 35mm in the field this morning at sunrise, and there are a few things to sort out.

I found focusing with the monocular out in the field with was much easier ( or maybe I'm just getting more practiced at it ), and due to the subject being quite distant there was no issue there. Resolution at f16 was also good on the subject and along the horizon at the centre of the frame. What I did notice when I got back to work on the photos was that there is some strong purple colour shift on some of the edges, which puzzles me. When I was first testing the lens in my living room under ceiling lights, I did notice that there were some strong purple blotches underneath where the lights were, even when the lights were out of frame, however aside from the normal CAs there wasn't anything of major concern. I haven't coated the inside of the adapter with anything yet, so maybe there are some internal reflections happening, but with no strong light source I wonder if something else is going on.

Some of it was ( mostly ) solved by shifting the Purple hue toward Blue, but some of it was too strong for that. First set of images, cropped in to show the fringing around the edges of the boat shed, before shifting the hue. Sun rising 90 degrees to the left of frame. 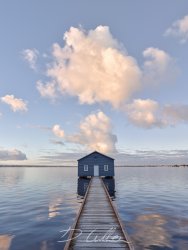 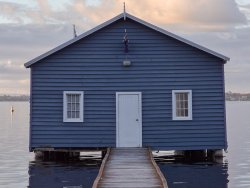 Second set of images, showing much more severe colour cast, before and after the Colour shift ( it was kinda too purple overall anyway ). 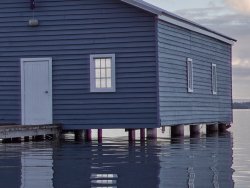 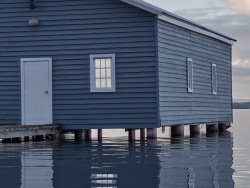 I'll have to continue my tests.
F

Okay, I don't really want to hijack my own thread, but I think that the purple fringing might be a shutter issue . . .

I looked back at the set of photos from this morning, and the fringing was getting worse as time went on, and they were always extending from a high contrast edge from the bottom of the frame upward.

This was the final frame of the morning, completely unedited. It shows the worst of the bunch. Note that the fringing extends in a different direction to the ones above, as the camera was back in landscape orientation. 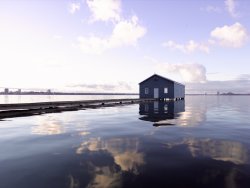 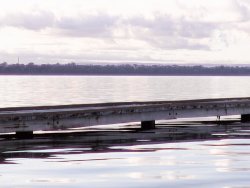 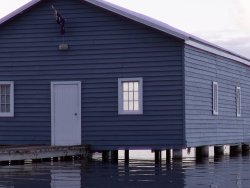 I've had the shutter fail on another DF body, and I remember seeing random blotches of purple before some of the shutter blades overlapped and jammed. I just shot another few test rounds of photos back in the living room without any problem, so hopefully it was just a gremlin. I teased up the mirror with my fingers, and there doesn't seem to be anything abnormal about the shutter blades that I can see, although there is a bit of what appears to be powder sitting on them in a couple of spots ( also noted on the other failed body after aforementioned failure ). I resisted the urge to touch the blades or attempt to clean them.

I also changed the batteries in the body, as the body was actually showing empty this morning ( I had to turn it off, fiddle with the batteries and then chuck it back it to squeeze some more juice out of it ). Hopefully I don't have to go looking for another body . . . .

Focusrite said:
With the 35mm on the Toyo, are there any issues with shifting/tilting movements on the image quality? I've used the 35mm in the field this morning at sunrise, and there are a few things to sort out.
Click to expand...

On my outfit I can get nice clean shifts out to 10mm. Beyond that image quality declines substantially because I'm pushing the edge of the image circle. This is with a 33mm x 44mm sensor.

Here's a screenshot of a panorama made with +/- 10mm of shift. This is my favourite location for evaluating lenses. There's lots of detail, near-far subjects, and I'm very familiar with what things should look like. You can find a full resolution JPEG of the file used to make this screenshot, along with an unshifted series from f/3.5 through f/22, with a near focus target and an infinity target, at this location: https://drive.google.com/drive/folders/1pq56iTtozXpGFtVhj4LnmyjH23T_oi6R?usp=sharing

I don't get the purple fringing I see in your images. There's definitely something going on that isn't the lens.

There is very little to complain about in those images with regard to resolution; pretty good even in the corners. I've had another play with my lenses out in the field, and so far the purple fringing has not happened again. Maybe it was a battery issue, maybe just something odd with that particular shutter speed. Time will tell.
You must log in or register to reply here.
Share:
Facebook Twitter Reddit Pinterest Tumblr WhatsApp Email Link
Menu
Log in
Register
Top