Seems like there are a number of folks quietly shooting away with these "twins" that were looking at a way to keep the content together so I thought it would be useful to start a "fun with" thread.

I'm going to start with some questions on settings but clearly this thread is also meant to be a place where we can post our shots!

First up for jpegs - right now I have them set at the default...anyone tweak those settings and find something more pleasing?

I haven't touched in camera B&W anyone?

What do you use your custom function button? C on the mode dial?

I have the camera set to enlarge the view as it focuses as well as to show me a blow up of the focus area when I got to image review.

OK I will give you one of my normal test subjects (from my previous thread) the bay bridge although the question yesterday was what bridge...... Lovely shot Terry
It's obviously a great camera (although I have seen some rather soft corners, but maybe that's just my current obsession).

Not tempted though . . . I really think I've had it with small cameras other than my little v-lux 20, which has the benifit of a stupidly long zoom.
H

Thank you Terry for doing this! I look forward to see what people create with these little cameras. I have had my S95 for about three weeks now and like it a lot as a companion to a Canon 5D DSLR, much more so than the Panasonic G1 I had last winter.

So far I have only used JPG and think it works surprisingly well. I use "my colors" with everything default except that I have put Sharpness, Contrast and Red at -1.

I really enjoy this camera and the only complaint I have right now is that AWB is too blue/red on overcast days (at least when there's snow). I tried switching to "Cloudy" WB, but it didn't seem to help much. One can make adjustments to AWB, but if I do that AWB will be wrong indoors and on sunny days. We'll see how much of a problem this turns out to be. Maybe I can create a custom WB to use on such days (and save it to use again, I mean). I don't know if that's possible - I'll look into it.

Here are a few of the shots I have taken so far: 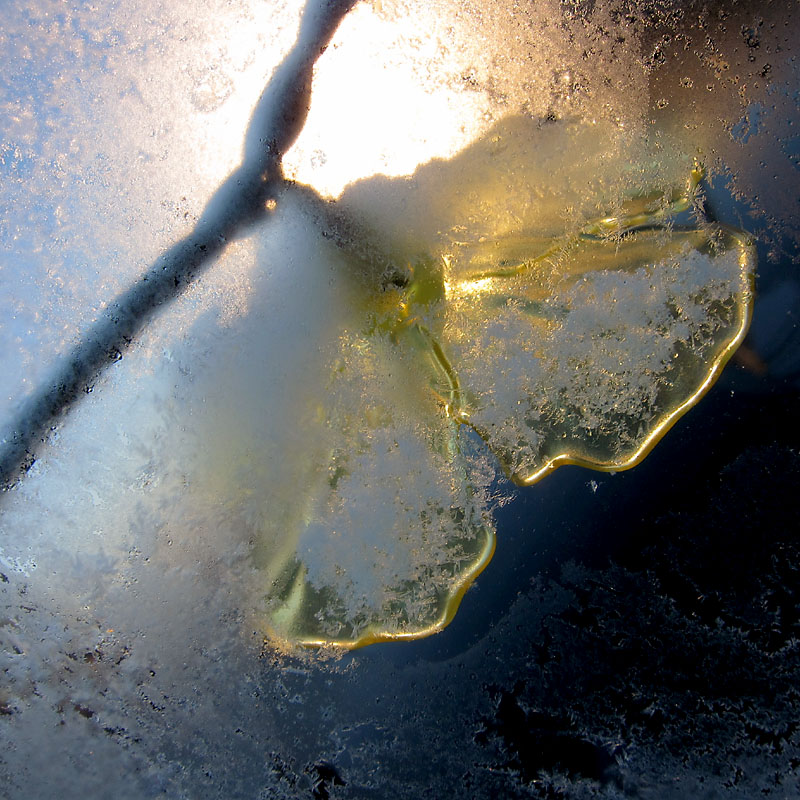 I used a small Gorillapod for this one: 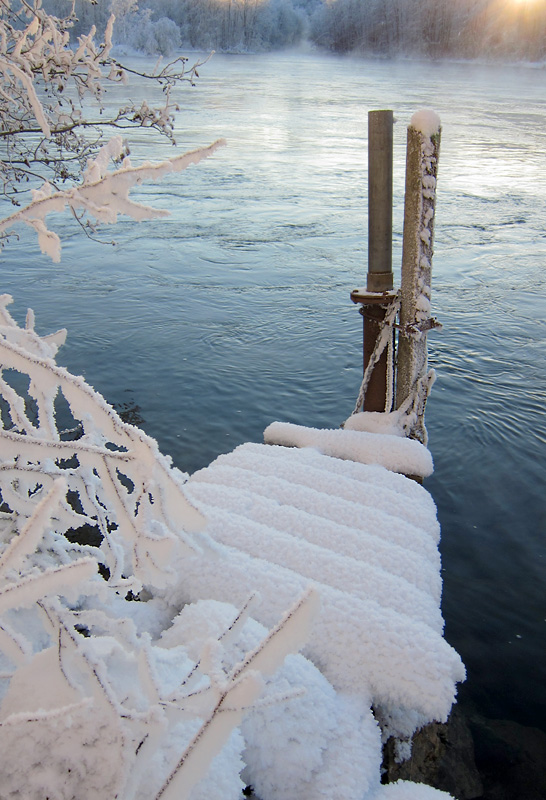 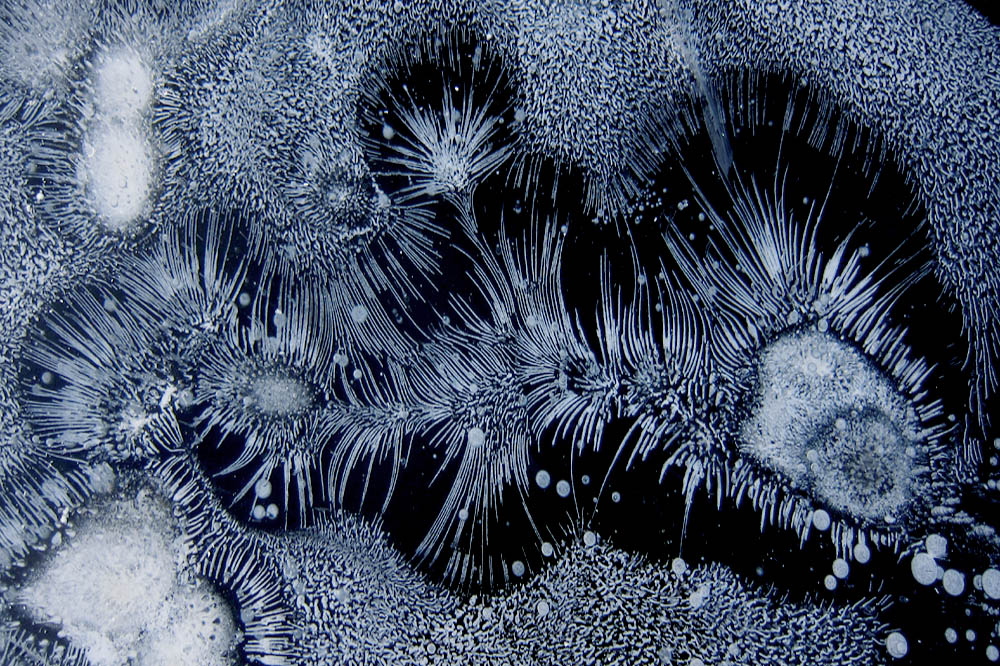 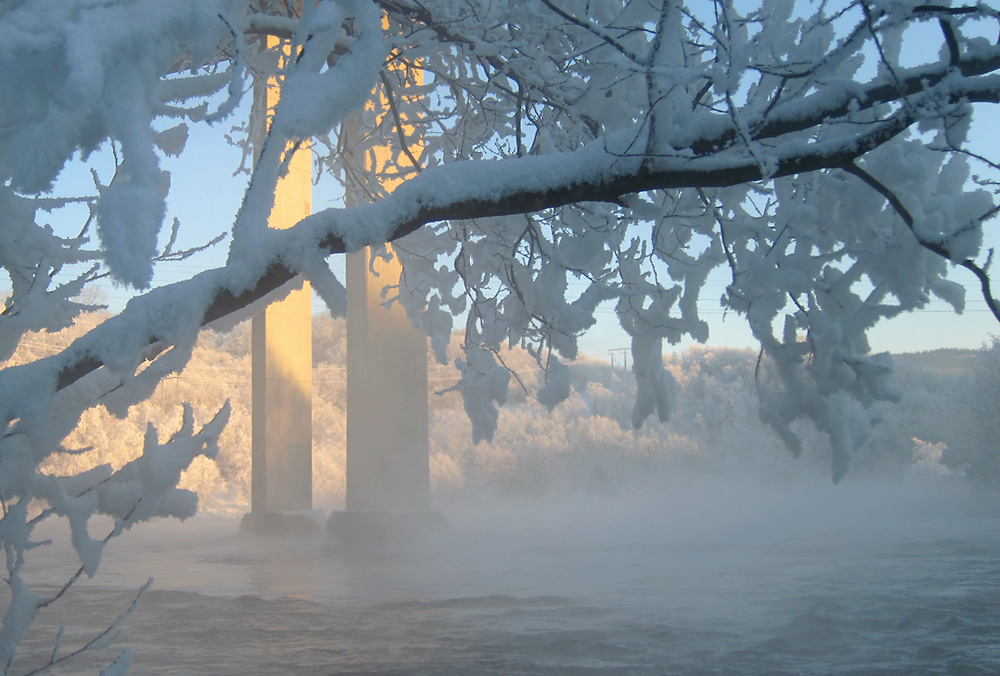 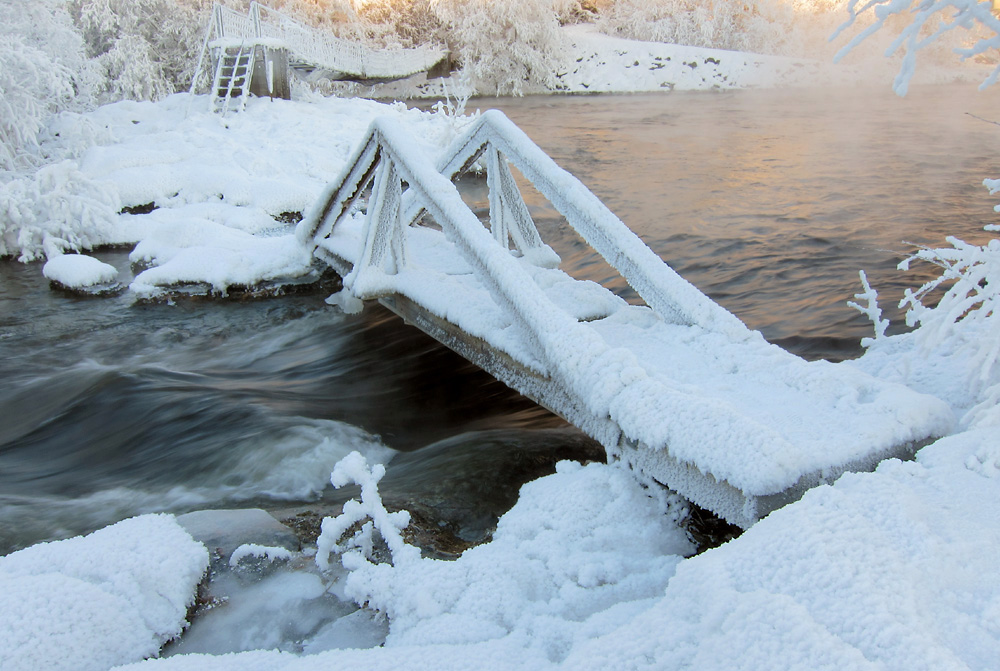 Wow Helena - it is definitely winter! Today we are expected to get up to 65F (17C) here today.

Love the abstract number 4 and then the soft color/light of the 5th one under the bridge transforms something that could be so ordinary.
H

Thank you Terry! The abstract (#4) is ice. We were ice skating on a lake and the ice was amazing.

17C, that's quite a difference! I love winter and will try and make the most of it, but it arrived very early this year (middle of October), so I fear it'll feel too long before it's spring again.

Wonderful shots, everyone! Terry, thanks for starting this thread.
Z

Thank you! I should have taken more photos of the patterns in the ice because they very fascinating, but it wasn't easy. The ice was so perfect that even with skates it was hard to get a "grip". My feet slipped when I crouched down to take photos. Must have looked silly, plus I often ruined an intended subject by accidentally running a skate across it.

Some people had dogs with them out on the ice and it was really funny to see the excited dogs try to run on the ice.

Hope others will post their photos in this thread soon!
Z

Helena said:
Some people had dogs with them out on the ice and it was really funny to see the excited dogs try to run on the ice.
Click to expand...

I can only imagine! :ROTFL:

Greetings from Miami....
Always wanted to try the G series so I have both side by side S95 and G12 with do a thread comparing. In the meantime The G and S series are my carry cameras when traveling....no worries about loss or damage and able to capture a usable file.

Forgive me for posting older camera pictures but here are a couple from a generation or two back....

Terry,I was looking at a dlux 5 but this thread may change my mind the S95 looks like I may need to consider.What didn't you like about the dlux 5? Is the IQ a lot better with the S95?

mwalker said:
Terry,I was looking at a dlux 5 but this thread may change my mind the S95 looks like I may need to consider.What didn't you like about the dlux 5? Is the IQ a lot better with the S95?
Click to expand...

So, after using the m4/3 and NEX cameras, some of the compacts are feeling a just bit too small to me these days. So, I may not be the best person to ask.

There are aspects of both the LX-5 and the S95 that I don't like. These are highly personal.

S95 - I really don't like the placement of the shutter button. It really feels like it needs to be further to the right (almost exactly where the mode dial is). I'm not the only one to hold it and say that. I also get the sense and I have to try a bunch of different methods but I do have more instances than I find acceptable where it doesn't lock focus. LCD very nice

LX-5 On the Panasonic version on the camera the back buttons were silver and the little icons for what they do are just indents and I found them hard to see (I know I could have memorized them but didn't). Think the AF is a bit more competent thank the Canon. There was nothing overly irritating about the camera but I just wasn't bonding with it.

TEBnewyork said:
Greetings from Miami....
Always wanted to try the G series so I have both side by side S95 and G12 with do a thread comparing. In the meantime

Very cool! Is that a built-in effect for the S95?

Amin said:
Very cool! Is that a built-in effect for the S95?
Click to expand...

yeah...both S95 and G12 also have a built in fisheye effect. Some really nice shots in this thread, really play to the supposed strength of the pocket cameras -- always having a good cam with you.

I'm chuckling over your bonding "difficulties" with the LX5, Terry. I went through the exact same thing with the LX3.

I've tried to use my GF1 + 20mm as my "always with me" fast-lens cam, but it is truly too large for that. Have long considered the S90/s95 pair, but still not convinced. May sell something off and *finally* try the Ricoh GRD series -- still have a working Ricoh film camera that I love and people rave about the size/ergonomics of the GRD3.

This search of mine for the "perfect" pocket cam has gone on forever, it seems.Part of the problem is that I can't seem to decide if I want to fiddle with it or just go for P&S.

I am really enjoying my s95, which I ended up purchasing when I realised the limitations of the upcoming Oly XZ-1 that I had intended to get.

I was looking for a 'dog walking' camera: small enough to slip into a pocket but good enough, should something lovely happen with the light and I might want, at a push, to use the results for some serious purpose.

I was also aware that after two years of chasing perfection and scaling up through gear until I had a P65+ and two bodies for it plus a fair sack of glass, on top of M9 and plenty of glass and 5dII and Oly Pen (gear slut, me?) I had failed to find creative nirvana. Instead, oddly, out of all that exercise I find my style and interest shifting towards more dream-like images, verging on impressionistic. Now, these can be had by shooting high res and then processing the hell out of the file but in truth the most natural results I have achieved tend to be from either small sensor cameras or from small crops from large sensor frames. I love my little GRDII but it has its limitations and I wanted a faster lens and, horror of horrors, a zoom of sorts. So I got the S95. Bingo. It does what I want!

Here's an example. It's a heavy crop from an S95 frame and it is processed fairly extensively but I went out today and shot the same scene with a 5DII and try as I might I couldn't get the same soft dreamy look.

I made a print of the S95 version, 25cm square, on HP Hanny Fine Art Textured paper, and it is, even if I say it myself, really quite nice!

Thanks to Terry for bringing the potential of this cool little camera to my attention!

More fun with the s95 and that small sensor rendering. Still loving taking this one for a walk!

ISO 400 with a little extra NR introduced so as to increase the slightly dreamy mood.

tashley, looks like a painting. Maybe should blow it up for wall decoration.